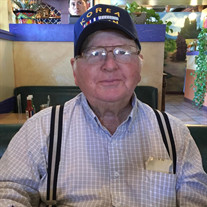 Heishman Funeral Home Inc. sends condolences to the family of Alvin Lee Irwin. It is with great sadness that the family of Alvin Lee Irwin announces his passing after battling cancer, on Wednesday, September 25, 2019, at the age of 88. He was a beloved member of his community and will be greatly missed. Alvin Lee Irwin was born on August 17, 1931, to Joseph Earl and Wilmonth Vann Irwin of Columbia Furnace, Virginia. His parents and brother Bobby Irwin, Sr, and half brother Lindy Welch predeceased him. Alvin will be lovingly remembered by his wife of 67 years, Marion McKenzie Irwin and his children, (son) Douglas Earl Irwin and (daughter) Debra Irwin Davis (Michael). Granddaddy Alvin, as he was known to his grandchildren, will be kept in their hearts as in their memories forever. His grandchildren are Ashlyn Davis Trant, (Reuben), Michael William Davis, Jr (Ashley), and Megan Davis Miller (Joshua). Alvin was blessed to have four great-grandchildren who loved and adored him: Julia and John-Luke Trant and Annalee and Michael Davis. He is also survived by his nephews Bobby Irwin, Jr., Davy Vann, Jimmy Vann, and nieces: Glenda Vann and Linda Gochenour, who even as they grew older still were a part of Alvin’s everyday life. Alvin served in the Army from 1948-1952 and was a veteran of the Korean War. Alvin was a Charter member of the Mt. Jackson Rescue Squad and continued to volunteer throughout his life there. The Rescue Squad appreciated and valued Alvin’s time and commitment, which was greatly appreciated by his family and all who worked with Alvin. Alvin was a man of God and served the Lord every day. He was a member of the Quicksburg United Methodist Church. The family is honoring Alvin’s wishes, as there will be a private burial. The family will host a family night on Saturday, September 28th from 6:00-8:00 pm at Heishman Funeral Home in Edinburg. In lieu of flowers and food, the family is requesting donations be made to the Mt. Jackson Rescue Squad in his memory. The arrangements are in the care of Heishman Funeral Service, Inc. and Valley Funeral Service Branch, Bowman’s Crossing. Online condolences can be made at valleyfs.com

The family of Alvin Lee Irwin created this Life Tributes page to make it easy to share your memories.

Send flowers to the Irwin family.