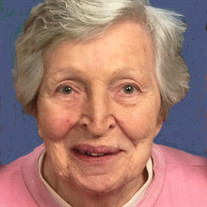 Annette Reuss Jenkel (November 7, 1927-July 9, 2019) was born in Buffalo, NY, the daughter of Henrietta and William Reuss. She is survived by her three children and their spouses: Linda and Gordon Henderson, Martin and Ann Jenkel, and John and Jody Geanious Jenkel; eight grandchildren, Matt and Steven Henderson, Brian, Timothy, Peter, and Sarah Jenkel, and Jesse and Jaime Jenkel; four great-grandchildren, Summer, Taylor, and, Avery Henderson and Emma Jean Jenkel. She is also survived by three nieces: Diane Voelker, Carol Santora-Holzerland, Janet Shilling and their families, Michelle and Marcus Carey, and Debra Gray and her family. She was predeceased by her husband Albert Jenkel, longtime companion Ellen Carey, and brother David Reuss and wife Oleta. She raised her family in Arlington, Virginia and then moved to Silver Spring, Maryland to help raise her “second family”, Michelle and Debra Carey. Annette was very involved with her church and Professional Secretaries International. She was employed by Dutton and Dutton law firm in Washington DC for over 20 years and retired to volunteer at the Washington Hospital for Sick Children and The Little Blue House for border babies, both located in Washington DC. Annette was a long-time advocate of racial and women’s equality. She was instrumental in the opening of the Arlington County Action Program which provided full time daycare for underprivileged children which opened in 1965. Her life motto was practicing random acts of kindness. She will be sorely missed by all of us that loved her dearly. There will be a private family gathering in Falls Church, Virginia. A special thank you to all those that cared for her at Shenandoah Terrace in New Market, especially Madison Offman. Online condolences may be left at www.valleyfs.com Arrangements by Heishman Funeral Home Inc., Valley Funeral Service Branch, Edinburg.

Annette Reuss Jenkel (November 7, 1927-July 9, 2019) was born in Buffalo, NY, the daughter of Henrietta and William Reuss. She is survived by her three children and their spouses: Linda and Gordon Henderson, Martin and Ann Jenkel, and John and... View Obituary & Service Information

The family of Annette Irene Jenkel created this Life Tributes page to make it easy to share your memories.

Send flowers to the Jenkel family.