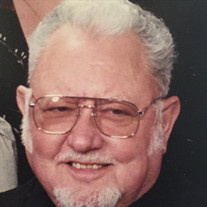 Arvie Lee Loyd, a resident of Mt. Jackson, VA, passed away peacefully at home on Wednesday, May 30, 2018. Arvie was preceded in death by his parents, Arlie and Amy Loyd, his brother, Hugh Loyd, his daughter, Lisa Loyd, two grandchildren, Kristina Platt and Cody Loyd, and a great grandchild, Logan Smith. He is survived by his wife, Betty Loyd; four sons, Arvie Glenn, Barry and wife Deadra, Robert and wife Peggy, Kyle and wife Della; two daughters, Marcie Leist and husband Dallas, and Joanne Platt and husband Bill, a brother, Gene Loyd, fifteen grandchildren and eleven great grandchildren. Arvie was born in Eupora, Mississippi on January 23, 1937. He was a life-long automotive mechanic, Volvo Specialist. On March 24, 1960, he married the love of his life, Betty, who remained a loyal companion raising their children to have faith, give to others and work hard. Arvie was a devoted husband and father who enjoyed gardening, cooking on the grill, entertaining and giving to others. He spent his time with his family and friends swimming, fishing, camping and enjoying the moment. His children and grandchildren gave him the most pleasure in life leaving them with countless memories. The family will receive friends on Saturday, June 2, 2018 from 6pm to 8pm at Valley Funeral Service, Bowmans Crossing in Edinburg, VA. Funeral Services will be held on Sunday, June 3 at 2pm at First Baptist Church in Woodstock, VA with Pastor Darryl George officiating. Burial will follow at Mount Jackson Cemetery. In lieu of flowers, memorial contributions may be made to the Loyd Scholarship Foundation, 71 Youngs Drive, Front Royal, VA 22630.

The family of Arvie Lee Loyd created this Life Tributes page to make it easy to share your memories.

Send flowers to the Loyd family.