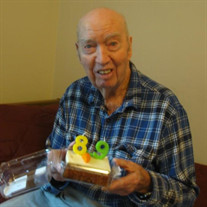 The staff at Heishman Funeral Home Inc. send condolences to the family of Bobby E. Vann. Bobby E. Vann, 90, of Toms Brook, Virginia went to meet his Savior comfortably at 3:50 AM on Saturday, July 18, 2021, at Greenfield Reflections under Hospice Care in Woodstock, VA. Bobby was born August 23,1930 at home in Columbia Furnace, VA, son of the late Guy Cecil and Martha Catherine (Wolverton) Vann. He graduated from Edinburg High School in 1947 and entered the Marine Corp attaining the rank of Sergeant. He was then deployed to Puerto Rico and was honorably discharged in November 1956 with the rank of First Sergeant. He started working for the Shenandoah Telephone Company as an outside crewman and rose to a supervisory position over the outside construction and maintenance crew. Upon retirement, he then worked as an outside construction supervisor for ShenValley Homes and finally as a loan officer and branch manager for Farm Credit in Woodstock until he took early retirement in 1992. Bobby was baptized and joined the Antioch Church of the Brethren on July 25, 2004. He loved hunting and fishing and taking care of his parent’s farm and later his own small farm in Shenandoah County. Bobby’s older sister, Dorothy Stultz of Winchester, VA, his older brother, Graydon Vann of Columbia Furnace, VA, his younger sister, Betty Floyd of San Antonio, TX, and his younger brother, Donald Vann of Woodstock, VA, all preceded him in death. Three nieces, Roberta Morrison, Bonnie Snyder, and Martha Fulford, and six nephews, Ronald Stultz, Timothy Stultz, Graydon Vann Jr, Mark Floyd, George Floyd and William Floyd, survive him. The pallbearers will be Mark Floyd, George Floyd, Graydon Vann Jr, Timothy Stultz, Stephen Vann, and William Grandstaff with Ronald Stultz as an honorary pallbearer. The funeral service will be at 11:00AM on Saturday, July 24, 2021, at Antioch Church of the Brethren on Senedo Road, Woodstock, VA. In lieu of flowers memorial contributions may be made to the Church. Online condolences can be left at www.valleyfs.com Arrangements by Heishman Funeral Home Inc., Valley Funeral Service Branch, Edinburg.

The staff at Heishman Funeral Home Inc. send condolences to the family of Bobby E. Vann. Bobby E. Vann, 90, of Toms Brook, Virginia went to meet his Savior comfortably at 3:50 AM on Saturday, July 18, 2021, at Greenfield Reflections under... View Obituary & Service Information

The family of Bobby E. Vann created this Life Tributes page to make it easy to share your memories.

Send flowers to the Vann family.