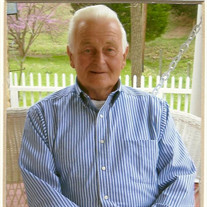 Charles Edward Heishman, age 87, of Fort Valley, passed away on Saturday, August 18, 2018, at Winchester Medical Center. Charley was born at his home in Fort Valley on January 13, 1931, where he grew up on the family farm during the Great Depression. He was the son of the late Phillip Elmer Heishman and Elizabeth Heishman. He was a graduate of Edinburg High School in 1949. He joined the Navy in March of 1953 where he was a medic and served for four years. On May 28, 1953, Charley and Patsy were married and they recently celebrated their 65th wedding anniversary with the family. After leaving the Navy, Charley and Patsy returned to the family farm in Fort Valley, where he was a dedicated farmer. He enjoyed supporting the community by undertaking various jobs, such as fence building, painting, and wood cutting. During his lifetime, he worked for Tamkin Construction and King’s Crossing Store, where he enjoyed his camaraderie and practical jokes with the local patrons. Charley was preceded in death by his siblings, Ruth Hollar (Lee), Eleanora McClanahan (Albert), Charlotte Gingerich (Ted), Phillip Elmer Heishman, Jr. (Jeannie), and Phyliss Ciuffreda (Sal), and a niece, Mary Heishman Makely, (John), who was like a daughter. He is survived by his wife, Patsy Trimble Heishman; three children, Diane Heishman LaFever (Dana), Steven Trimble Heishman (Becky), Lorin Heishman Crowder (Jeff); seven grandchildren, Dana George Liscio (Matt), Aimee George, Taylor LaFever, Beth Heishman Orndorff (Brian), Carie Heishman Neal (Trey), Daniel Crowder (Ellen) and Sarah Crowder. Three great grandchildren, Charlotte Belle Orndorff, Steven Matthias Orndorff, and Lena Mae Orndorff; a brother, Cecil Heishman (Maureda) and many nieces and nephews. The family will receive friends on Thursday, August 23, 2018, at Valley Funeral Service from 6 to 8 PM. He was a member of Faith Lutheran Church where a memorial service will be held on Friday, August 24, 2018, 11:00 AM by Pastor Shelby DePriest. Memorial contributions may be made to Faith Lutheran Church, 4260 Fort Valley Road, Fort Valley, Virginia 22652 or to ELCA Global Challenge https:www.elca.org/globalfarmchallenge.

Charles Edward Heishman, age 87, of Fort Valley, passed away on Saturday, August 18, 2018, at Winchester Medical Center. Charley was born at his home in Fort Valley on January 13, 1931, where he grew up on the family farm during the Great Depression.... View Obituary & Service Information

The family of Charles Edward Heishman created this Life Tributes page to make it easy to share your memories.

Send flowers to the Heishman family.