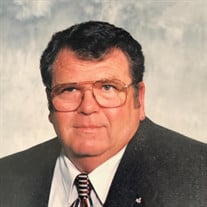 Charles Wayne King, 74, of Woodstock, passed away Friday, April 19, 2019, at his home. The funeral service will be held Friday, April 26 at 10:00 a.m. at Valley Funeral Service, 14116 S. Middle Road, Edinburg, VA 22824. Randy Sheads will officiate. Burial will be Friday at 2:00 p.m. at Stonewall Memory Gardens in Manassas. The family will receive friends Thursday from 6-8 p.m. at the funeral home. Mr. King was born December 27, 1944, in Washington, D.C., son of the late Gilbert Lee King and Elsie Melinda Courtney King. He was a Navy veteran and retired from Fairfax County Schools in 1996 after 30 years. He was a member of Woodstock American Legion Post #199, Woodstock Moose Lodge #575 and a life member of Centreville Vol Fire Department where he was a former Assistant Chief. He was a master mason in Acacia Lodge #16 A.F. and A.M. in Clifton, VA, member of Cassie Lodge #142 in Woodstock, VA, Royal Arch Lodge in Edinburg, VA and Scottish Rite in Alexandria, VA.and a 32nd Degree Mason. He is survived by his wife, Brenda Diane Sheads King whom he married on August 26, 1967; God Daughter, Cynthia Jean Clinard and husband Michael and children Shawn and Ginny of Juliette, GA; niece, Cheryl L. Waybright and husband Anthony and their children Marshall and Courtney of Smyrna, GA and niece Malinda S. Sibille and husband Curtis and their children, Lee and Madelaine of Griffin, GA. In lieu of flowers, contributions may be made to Woodstock American Legion, Centreville Vol. Fire Department or Woodstock Rescue Squad.

The family of Charles Wayne King created this Life Tributes page to make it easy to share your memories.

Send flowers to the King family.