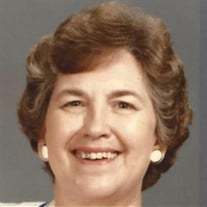 Damitra passed away on Wednesday, November 14, 2018, peacefully at home in Edinburg, surrounded by her family. Beloved wife to Gary, loving mother to Karen, devoted grandmother and great-grandmother. Damitra was a longtime resident of Alexandria, and Edinburg, VA. She was a 10th generation Virginian and an active member of many societies and organizations. She was the only daughter of Charles and Bessie Cook, born Damitra Elaine Cook on May 3, 1937. Damitra was born in Edinburg and raised in Annandale, VA, where she was a 1955 graduate of Fairfax High School. She was crowned Miss Annandale in 1952. Growing up, Damitra enjoyed playing sports with her 3 brothers and spending time with family. It was through her brother that she met and married Gary Meeds. A charter member of First Christian Church (Disciples of Christ) in Falls Church, Damitra served as a Youth Director for many years. She sponsored many Youth programs during her 10 years of service. After moving to Edinburg in 2000, Mr. and Mrs. Meeds began attending Wakeman’s Grove Church of the Brethren. Damitra was an avid genealogist, with a true heart for preserving history. A second generation member of the Descendants of ’76 chapter of the District of Columbia Daughters of the American Revolution. She served her chapter, state and national society proudly. She held several volunteer positions within the DAR and was elected to serve as D.C.D.A.R. State Regent from 1988 – 1991. She served as Corresponding Secretary General for the National Society from 1991 – 1994. She was delighted that her legacy will live on through her daughter and granddaughters. Damitra served as a Senior Leader for the Children of the American Revolution. She enjoyed traveling with her grandchildren each summer on the National Tour. She held the office of Senior State Chaplain for several terms and was a Life Promoter. Damitra was always an active member of her community serving as Rose Hill Woman’s Club President, Chairman of Volunteers for the Fairfax Cultural Association, Woman’s Club of Fairfax County, Pink Ladys at Fairfax hospital, Quilters Unlimited, National Association of Parliamentarians and she held the Honorary title of Kentucky Colonel. Damitra was a life member of Hottel Keller Memorial Inc. where she served as President and Director of the board. Her family was the true highlight of her life and she leaves behind her husband Gary, of 61 years, daughter Karen Falkenstein, and husband Tim. Her 3 grandchildren Andrew Falkenstein and wife Maryjean, Sarah Ferguson and husband Scott, Emily Camperos and husband Miguel. Four great-grandchildren, Charles, William, and Emma Falkenstein and Jacob Ferguson. She is also survived by her brother Gamaliel Cook as well as many nieces, nephews and cousins. She is preceded in death by her parents, Charles and Bessie Cook, and brothers William and Keith Cook. The family will welcome visitors Friday, November 16 from 6-8 pm, at Valley Funeral Home in Edinburg, Virginia and Saturday, November 17, at 10 a.m. at Wakeman’s Grove Church of the Brethren in Edinburg. Funeral service will begin at 11 am. Flowers are welcome, contributions may be directed to Dupont Community Credit Union Meeds Memorial Fund, P.O. Box 1365, Waynesboro, VA 22980

Damitra passed away on Wednesday, November 14, 2018, peacefully at home in Edinburg, surrounded by her family. Beloved wife to Gary, loving mother to Karen, devoted grandmother and great-grandmother. Damitra was a longtime resident of Alexandria,... View Obituary & Service Information

The family of Damitra Elaine Cook Meeds created this Life Tributes page to make it easy to share your memories.

Send flowers to the Meeds family.