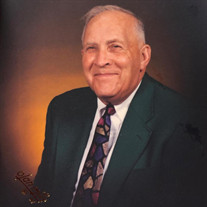 Heishman Funeral Home Inc. sends condolences to the family of Daniel Snyder Hottel. Daniel Snyder Hottel of Woodstock departed this life Tuesday, April 7, 2020. Daniel, or Danny, was born December 19, 1925, in what was then Fravels’ Hospital (now Sigma Sigma Sigma Sorority Headquarters) is located across the street from what was his childhood home on Muhlenberg Street. He was the only child of Lester Lee Hottel and Anna Florence Snyder Hottel. On September 14, 1947, he married Virginia Elizabeth Spiker. She was the love of his life and preceded him in death on November 29, 2010. He was also preceded in death by a grandson Trevor William Hottel. Dan and Virginia lived their life in Woodstock, of which he was a proud citizen. Eventually, they moved to a home they built on N. Lee Street. Daniel went to work at the age of 9 and worked for many places in his youth including “Hottel’s Trucking” (a homemade enclosed wagon that he used to haul ice & coal for local residents), the A&P Grocery Store, Community Theatre, Dellinger Funeral Home, Boyer Grocery Company, and Peer & Brill Motors. However, he found his true calling when he went to work for Shenandoah’s Pride Dairy, becoming the community’s milkman for over 37 years until his retirement in 1991. After “retirement” he went to work for Muhlenberg Ford-Mercury and was the Town of Woodstock’s Hydrant Technician for 20 years. Daniel is survived by his son Philip D. Hottel and wife Candace, grandson Zachary L. Hottel and wife Ayla all of Woodstock, and by his cousin Norma Jean Faber DeWitt of North Canton Ohio. In addition, he is survived by the thousands of close friends he made throughout his life. He often said it was his family and friends that made his life great. Apart from his family, Daniel’s greatest passion was being a member of the Woodstock Fire Department. Joining on June 6, 1942, he would serve that volunteer organization for 78 years and held every position in the department, including that of Fire Chief. WFD members, who referred to him as “Pops” or “Dee Dee,” were his second family. He felt honored to be a part of that organization and was proud that each member of his immediate family became members of the Woodstock Fire Department or the Woodstock Fire Department Auxiliary. He was also privileged to receive numerous awards from the fire department and the community. These included the Woodstock Rotary Club’s James Clower award in 2013 and a special resolution from the Woodstock Town Council recognizing his 75 years of service to the community in 2017. Since childhood, Daniel was an active member of Emanuel Lutheran Church in Woodstock which he attended faithfully throughout his life. Pastor Nathan Robinson of Emanuel Lutheran Church and Robert Funkhouser, Woodstock Fire Department Chaplain will conduct a private graveside service for Daniel on Saturday, April 11, 2020, at Sunset Memorial Gardens in Woodstock. A funeral procession led by the apparatus of the Woodstock Fire Department will carry the body from Valley Funeral Chapel via Old Valley Pike, S. Main Street, W. Court Street, Summit Ave. and North Street to the cemetery starting at 10:30 AM. The family requests that due to the public health situation, individuals interested in paying their respects view the procession while observing appropriate social distancing procedures instead of attending the graveside service. In place of flowers, the family asks that memorial contributions be made to the Woodstock Fire Department’s new apparatus fund at PO Box 176 Woodstock, VA 22664. Daniel’s family would like to extend their appreciation to the staff of Pine Meadows Assisted Living for their care in his final years and to all those who visited or called him during his time there. Online condolences can be left at www.valleyfs.com Arrangements by Heishman Funeral Home Inc., Valley Funeral Service Branch, Edinburg.

The family of Daniel Snyder Hottel created this Life Tributes page to make it easy to share your memories.

Send flowers to the Hottel family.