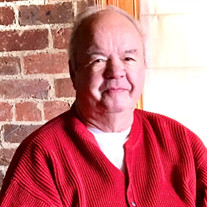 The staff at Heishman Funeral Home Inc. send condolences to the family of David Lynn Hovatter. David Lynn Hovatter, 78, of Mt. Jackson, Virginia passed away Wednesday, September 29, 2021, at Shenandoah Memorial Hospital in Woodstock. A Celebration of Life for Mr. Hovatter will be held at a later date. David L. Hovatter was born October 17, 1942 in Parsons, West Virginia, son of the late Walter and Mabel Gilmore Hovatter. David is survived by his wife, Maycel Y. Haddix Hovatter whom he married on April 30, 1959; four children, Natalie Hovatter Lytton (Bobby) of Front Royal, David Lynn “Sonny” Hovatter Jr. (Joanie) of Mt. Jackson, Gregory Lee Hovatter (Tammy) of Edinburg and Teresa Yvonne Kinder (Curtis) of Woodstock; two sisters, Eleanor Ann Cox of Verona and Hester Hunt of Monticello. He was known as PawPaw Dave to his five grandchildren, Alesia (Kyle), Melanie (Ben), Kallie, Phillip, and Brayden; and two great grandchildren, Ellie and Camden and numerous nieces and nephews. David was a lifetime farmer of Avondale Farm, Inc., and a member of the Shenandoah County Farm Bureau. David grew crops and raised livestock for over 60 years. Later in life, he also sold farm fresh eggs, enjoyed going to beef cattle sales, and talking with other farmers. David’s farming legacy lives on through his family. David was a skilled machine operator, driving tractors to operating heavy construction equipment such as dozers and cranes and also ran a trucking company for many years. David not only was a seasoned operator, but he was also happy to take time to give advice whenever people sought his help. He also had a lot of experience in the wood and logging industry, working in that trade in West Virginia before moving to Virginia. David was a successful businessman owning and operating several businesses over the years to diversify the farm, most recently D&M Meats, LLC in Mount Jackson, Virginia—which is continued to be run by his family. In lieu of flowers, contributions may be made to the Mt. Jackson Rescue Squad. Online condolences may be left at www.valleyfs.com Arrangements by Heishman Funeral Home Inc., Valley Funeral Service Branch, Edinburg.

The staff at Heishman Funeral Home Inc. send condolences to the family of David Lynn Hovatter.

Send flowers to the Hovatter family.