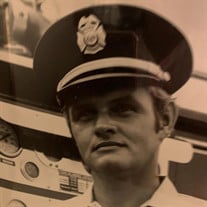 The staff at Heishman Funeral Home Inc. sends condolences to the family of Edwin Elmer "Ed" Peters. Edwin Elmer "Ed" Peters, of Maurertown, passed away at his home on Saturday, September 5, 2020 at the age of 80. He was born in Washington DC on August 21, 1940. He was preceded in death by his parents Charles William Peters and Elma Robey Peters. He is survived by his wife of 37 years, Shirley Rush Peters, son, Edwin Charles "Ed" Peters and his wife Vanessa, his daughter Lesli Peters Porter, and daughter Christy Peters Andrews and her fiancé Troy Baughman, stepson Steven Wetzel and his wife Nicole, and adopted daughter Jane Peters Johnson and her husband Kenny, 8 grandchildren, 4 great grandchildren, and his dog Zoey. Ed retired as a professional firefighter/paramedic from the Fairfax County Fire Department in 1981. He was an American patriot and an avid outdoorsman. He was a giving person and was always willing to help those in need. Ed believed in his Lord and Savior. Graveside services will be private. He will be laid to rest at Cedarwood Cemetery in Edinburg. Many thanks to Blue Ridge Hospice and his nurse Ms. Miller, for their loving care. In lieu of flowers, contribution can be made to St. Jude's, 262 Danny Thomas Place, Memphis, TN 38105 or Blue Ridge Hospice, 333 W. Cork Street, Ste 405, Winchester, VA 22601. Arrangements are in the care of Heishman Funeral Home, Valley Funeral Service Branch, Bowman's Crossing.

The family of Edwin Elmer "Ed" Peters created this Life Tributes page to make it easy to share your memories.

Send flowers to the Peters family.