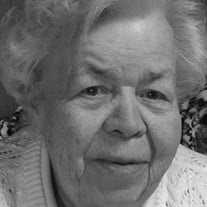 Heishman Funeral Home Inc. sends condolences to the family of Ellen French Fuller. Ellen French Fuller, 89 of Orlando, FL passed away peacefully Tuesday, February 4, 2020, at her home. She was born Aril 22, 1930 in Woodstock, VA, the fifth of eight to Warren B. French Sr. and Lena Sheetz French. After graduating from Duke University in 1950 with a degree in Botany, Ellen worked several years in the laboratories of Carnegie Institute in Washington, D.C. Ellen married Clif Fuller Jr. in 1957 and moved to Orlando where she became involved in local and national politics and was a precinct voting supervisor. She was active in the Orlando Garden Club and the Fern Club, but her real passion was the Orlando Dog Training Club where she worked as a trainer and AKC judge. For fun, Ellen loved working in her garden and quilting; Ellen gave most of her quilts to friends and family and donated many others. She enjoyed surf fishing and woodworking with Clif and camping trips to many national parks when their children were young. Ellen had a servant’s heart for her community and assisted in church thrift stores, soup kitchens, and Meals On Wheels. Among many other things, Ellen will be remembered as always being available to support a friend in difficult times. Ellen was preceded in death by her husband of 50 years, Clifford L. Fuller Jr.; her brothers F. Douglas French, Sr., Millson S. French, Sr., and Orrin L. French, Sr.; her sister Lena French Fuller; brothers-in-law Jim Randel and Robert F. Fuller; sister-in-law Pat French. Ellen is survived by her children Susan F. Johnson (Darrell) of Orlando, Tom Fuller of Princeton, AL, Richard Fuller (Kristen) of Alabaster, AL, and Margaret F. Phillips (Eric) of Sharpsburg, GA; her grandchildren Paige Johnson, Grayson, Bennett and Nora Fuller, and Stephen and Nathan Phillips; great-granddaughter Morgan Johnson. She is also survived by her brother Warren B. French Jr., and sisters Emma Randel and Sally Weber; her sisters-in-law Doris French, Marian French, and Joyce French; her brother in law John Weber and many nieces and nephews. The graveside service and interment will be held Saturday, February 29th at 3 pm at the Massanutten Cemetery, Woodstock, VA. Immediately following the interment there will be a memorial and reception at French Brother’s Cabin in Woodstock. In lieu of flowers make donations to the charity of your choice in Ellen’s name.

The family of Ellen French Fuller created this Life Tributes page to make it easy to share your memories.

Send flowers to the Fuller family.