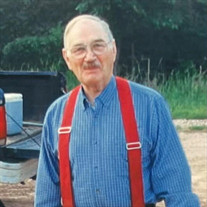 The staff at Heishman Funeral Home Inc. sends condolences to the family of Franklin Delano O'Meara. Franklin Delano O'Meara, 81, of Conicville, VA, passed away on May 9, 2022, with lifelong friends, Robbie and Gail Cloyd, by his side. Frank was born on October 22, 1940, in Arlington, VA, and graduated from Washington-Lee High School in 1958. In 1963, he was drafted into the U.S. Army, where he served honorably as a paratrooper in the 101st Airborne Division out of Fort Benning, GA. Frank is fondly remembered for his fascinating stories about his Alaskan adventures. He discovered the majestic beauty of Alaska during a hunting trip, which led him to relocate to the Anchorage area in 1968. He spent 35 years in Alaska and made the most of his time up north. In addition to working as a master mechanic at Fort Richardson, he competed in snowmobile races, hunted Grizzly bears and moose, guided big game hunting trips, and panned for gold. In fact, he once panned enough gold to pay for a summer vacation in Hawaii. His sister Joan, who he lovingly called "Sis", still wears a necklace with a gold nugget panned by her brother. Frank also had work adventures - he was involved in the construction of the Alaska Pipeline, which at the time was the largest private construction project in American history. He led crews during seismic surveys of the North Slope and construction of the pipeline itself. Frank also worked for five years for the Alaska Railroad as a heavy engine mechanic. Upon retiring from the Alaska Railroad in 2003, he returned to Virginia and settled in the Shenandoah Valley. Frank had many hobbies, including collecting antique engines and tractors. He served as the president of an antique tractor/engine club in Alaska. He also was a member of the Massanutten, VA Antique Tractor and Gas Engine Club. He was a mechanical genius, who, with his wealth of knowledge and experience, could repair or overhaul any gas/diesel engine or tractor, or at least tell you how to do it. Frank was independent and lived his life as he wanted. He was a gentleman, a skilled storyteller, a thoughtful brother, and the best uncle ever. Above all, he was a loyal friend to everyone that knew him. Frank is predeceased by his parents Rudolph Curtis and Alyce O'Meara and brother Rudolph Curtis O'Meara, Jr. He is survived by his sister Joan O. Fern (Dennis) of Falls Church, VA, niece Alyce Kelley (Dana), great-niece Kate Kelley, and great-nephew John Waters. A celebration of Frank's life will be held on May 18, 2022, from 2:00 - 4:00 PM at Valley Funeral Service in Edinburg, VA. In lieu of flowers, donations to the Conicville Volunteer Fire Department are suggested. Donations may be sent to the VFD at 763 Conicville Road, Mount Jackson, VA 22842. Online condolences can be left at www.valleyfs.com Arrangements by Heishman Funeral Home Inc., Valley Funeral Service Branch, Edinburg.

The staff at Heishman Funeral Home Inc. sends condolences to the family of Franklin Delano O'Meara.

Send flowers to the O'Meara family.