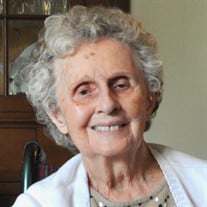 The staff at Heishman Valley Funeral Service Inc., sends condolences to the family of Gloris Beahm Morgan Rudy. Gloris Beahm Morgan Rudy, mother, wife, devoted church member and wistful writer of unpublished stories, passed away May 28, 2020. She was 90 years old, although she did occasionally “fib” that she was 100, and had been a resident of Consulate Health Care of Woodstock the past five years. She had resided in Shenandoah County since 1961. Hers was, as she would say, a long and good life. Gloris Lorraine Beahm was born in Waynesboro VA August 25, 1929, to Gilbert and Phyllis Beahm. Her father, who had a small farm in Dooms VA, worked in the maintenance department at the DuPont plant in Waynesboro retiring in 1968. Her mother was a homemaker, but in poor health much of her adult life and died in 1958. Gilbert Beahm married Daisy Alther in 1961. Gloris had two younger siblings, a brother James T. Beahm of Limestone ME, who died in 2005, and Jerdena “Jackie” Bottenfield who lives in Churchville VA. After graduating high school and attending Fairfax Hall, a woman’s college in Waynesboro, she met Everette Walton “Tip” Morgan who was working at Fishburne’s Drug Store. Although she claimed she wasn’t interested in him when they met, romance blossomed and they were married in January 1950 in Crewe VA in the parlor of Robert and Pearl Marshall’s home. Mr. Morgan had grown up in Crewe. He was the Marshall’s nephew and had attended nearby Hampden-Sydney College. The couple honeymooned in Richmond VA and took an apartment in Waynesboro where Gloris worked as a dental assistant and Mr. Morgan began his career as a sales representative with Powers & Taylor Drug Co. Mr. Morgan (“Tippy” to her) was athletic, quick to smile and an avid outdoorsman. He matched well with his bride’s love of the countryside and they enjoyed 23 years together. The couple had four sons. Everette Walton Jr.; twins James Robert and Robert Edward and Stephen Alderton. Mr. Morgan died of a heart attack in March 1973. She took much pride in her family and without hesitation she not long ago answered the question of what are you most proud of in your life with: “Raising four good sons.” All four sons survive. Walt Morgan of Woodstock is a Financial Associate with Thrivent. James Morgan of Daleville is a retired publishing and media executive. Robert Morgan of Lynchburg is executive officer of the Home Building Association of Central Virginia. Dr. Stephen Morgan of Roanoke is senior vice president and chief medical information officer for Carilion Clinic. The family moved to Woodstock living on Court Street for several years, then in Maurertown and again in Woodstock at 724 S. Main Street. In Woodstock, Mrs. Morgan worked at Leggett Department Store and then for more than 20 years as a dental assistant and receptionist for Dr. James Lambert. Throughout her life she wrote stories and snippets about life employing a flourishing style – one son quipped she never missed using an adjective even when none was needed – that gave her much pleasure. While only one was apparently published, a story about her twin sons being mixed up when they were christened, her jottings -- some written on the back of envelopes, some in notebooks and others neatly typed -- filled several boxes. She was an avid reader and until her eyes failed her ended every day reading passages from her Bible. An active member of Emmanuel Lutheran Church, Mrs. Morgan for many years was a Sunday school teacher and youth leader at the church. In July 1985 Gloris married Harry Samuel Rudy, who like Mrs. Morgan, was a long-time member of Emmanual Lutheran Church. Their romance was once best described as “Harry pursued her until she caught him.” Rudy was co-owner of the Ideal IGA Foodliner. A kind-hearted and generous man, they enjoyed 28 years together, traveling across the United States on several long road trips, some made longer than planned based on Mrs. Rudy’s well-documented challenge in following maps and directions. Mr. Rudy passed in June 2014 at age 97. Through the years Gloris was active in a variety of community organizations including the Order of the Eastern Star, the Red Hat Ladies, Shenandoah Memorial Hospital Women’s Auxiliary and the Woodstock Garden Club. She took pride in ribbons won at the Shenandoah County Fair, especially a blue ribbon for photography for a photo of Mr. Rudy’s strawberries. In later years before failing health necessitated residing in a long-term care facility, she and Mr. Rudy enjoyed spoiling grandchildren at the home they built together on Eagle Street. In addition to her sons, she is survived by four daughters-in-law, Lloydine Jones Morgan of Woodstock, Becky Davis Morgan of Daleville, Kathi Rechin Morgan of Lynchburg and Ellen Crawford Morgan of Roanoke; a stepson Reggie Rudy of Woodstock VA; seven granddaughters and spouses, Kate and Dan Drew of Middletown CT, Melinda and Josh Fox of Harrisonburg VA, Anne and Matt Rogers of Charlotte NC, Erin and Ryan McConaghy of New York, NY, Christina and Sands Stimpson of Mobile AL, Michelle and Josh Beisley of Roanoke VA, and Sara and Chad Hampton of Catawba VA; two step grandchildren, Evan and Ariel Rudy; and 14 great-grandchildren. A private family graveside service will be held Tuesday, June 2 with burial in Detrick Cemetery where she will rest beside her first husband. A celebration of her life will be held at a later date. In lieu of flowers the family is asking that donations be made to Emmanuel Lutheran Church, 127 E High St, Woodstock, VA 22664.

The family of Gloris Beahm Morgan Rudy created this Life Tributes page to make it easy to share your memories.