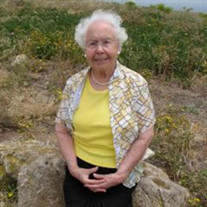 Heishman Funeral Home Inc. sends condolences to the family of Grace Fitzsimmons. Grace Fitzsimmons, of Woodstock, VA, passed away peacefully on April 26, 2020, two weeks shy of her 100th birthday, surrounded by her loving family. Born in Ludlow, MA, May 8, 1920. She was the eldest child of a large Portuguese family. She was a 1938 graduate of Ludlow High School and Valedictorian of her class. She was an avid scholar and won first prize in the Massachusetts State Debate competition. After high school she moved to Washington D.C. and was employed by the United States Army Command as an interpreter and later worked in the Brazilian Embassy as a translator and secretary for the U.S. Government and for Brazilian Military Attaché. Grace graduated from George Washington University and received department high honors graduating Magna Cum Laude, and was the first graduating class to receive a B.A. in American Thought and Civilization-- also known today as American Studies. While attending George Washington University, Grace met her husband Jim Fitzsimmons while crossing the street on her way to class. They were married in 1947 and settled in Alexandria, VA where she became a high school English and History teacher in Fairfax County at Groveton High School for over 23 years. Grace was a voracious reader, lover of poetry, theater, and classical music. She would often take the train to New York City to see opera performances at the Metropolitan Opera House. She had a thirst for knowledge, was a true patron of the arts, loved discussing politics and had a passion for education. Even in her later years you could find her still in the classroom attending courses through the Lifelong Learning Institute. Grace is survived by her brother James (Jimmy) Guerra of Port St. Lucy, FL; her son, James A. Fitzsimmons and his wife, Annette LaRocque Fitzsimmons of Woodstock, VA and their four children and one very cherished great-grandchild: Margot Fitzsimmons of Oakland, CA; Rachel Fitzsimmons and great-grandson, Adrian Ward of Woodstock, VA; Christian Fitzsimmons and his wife Maggie of Athens, GA; and Sarah Grace Fitzsimmons of Fairfax, VA. She was also the proud aunt of 24 nieces and nephews and many great-nieces and nephews. Grace was also preceded in death by her beloved husband Jim Fitzsimmons with whom she was married for 50 years until his death in 1997. Her final resting place will be at Arlington National Cemetery with her husband. A special thanks to Pine Meadow Assisted Living for taking such loving care of Grace in the final year of her life. In lieu of flowers, donations may be made in Grace’s memory to the Woodstock Public Library.

The family of Grace Fitzsimmons created this Life Tributes page to make it easy to share your memories.

Send flowers to the Fitzsimmons family.