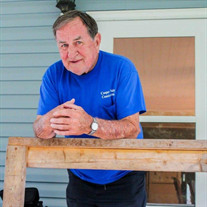 Valley Funeral Chapel, Bowmans Crossing, will be open for family and friends to sign the guest book on Sunday, February 14th from 9:00 AM until 5:00 PM. Harry Wayne Cooper, 79, of Edinburg, passed away on Tuesday, February 9, 2021. Harry was born on March 21, 1941 in Onego, WV and was the son of the late Ernie B. and Daisy B. (Painter) Cooper, On January 19, 1962, he married Margaret Diane Saunders, who survives. They lived in Silver Spring, MD, for several years where he started his career as a home builder. Once they moved to Edinburg, Harry started his own company, Cooper Valley Construction, which thrived for 48 years. In his early years, he enjoyed NASCAR races and raising cattle on the farm. Ultimately, he enjoyed spending time with his family and would often show his affection through distinct nicknames. In addition to his wife of 59 years, he is survived by their two children; Robert Wayne Cooper of Edinburg, and Debora June Cummins and husband Donald of Edinburg; a brother, Jerry Cooper of Woodstock; five grandchildren, Cristy Fogle and husband Loren, Donald Scott Cummins and wife Tiffany, Caitlin Cummins, Tayler Stephens and husband Jerod, and Garrett Cummins; eight great-grandchildren, Easton Cummins, Briar Stephens, Josslyn Fogle, Oakleigh Cummins, and AnnaKate Stephens. He is also survived by three special great-grandchildren, Lane, Kora, and Luke Stephens. In addition to his parents, he was preceded in death by his siblings, Olive Armentrout, Junior Cooper, Gene Cooper, Jack Cooper, Annabelle Cubbage, Patsy Cooper, and Benny Cooper. The family will receive friends one hour prior to the service at the church. The funeral service will be held on Monday, February 15th at 11:00 AM at Grace Baptist Church in Woodstock with Pastor Ken Sparks officiating. Burial will follow at Sunset View Cemetery. Memorial contributions may be made to Grace Baptist Church, 1255 Hoover Road, Woodstock, VA 22664 or American Cancer Society, 420 Neff Ave Ste 210, Harrisonburg, VA 22801. Pallbearers are Jeff Cubbage, John Cooper, Jim Cooper, Timon Cooper, Butch Cooper, and Mike Cooper.

Valley Funeral Chapel, Bowmans Crossing, will be open for family and friends to sign the guest book on Sunday, February 14th from 9:00 AM until 5:00 PM. Harry Wayne Cooper, 79, of Edinburg, passed away on Tuesday, February 9, 2021. Harry was... View Obituary & Service Information

The family of Harry Wayne Cooper created this Life Tributes page to make it easy to share your memories.

Valley Funeral Chapel, Bowmans Crossing, will be open for family...

Send flowers to the Cooper family.