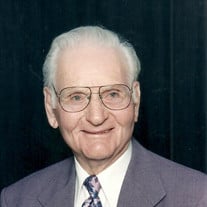 Harry Morgan Morris, 95, passed away peacefully on March 9, 2019, at Shenandoah Memorial Hospital in Woodstock, Va. He was born December 17, 1923, to Lonnie B. and Grace Lee Morris. He is predeceased by four brothers, Otis, Owen, Raymond and Raleigh and one sister, Olive. He is survived by his wife Anna with whom he celebrated 70 years together; a son, Dennis M. Morris and wife Doris; grandson, Jeff Boyer and wife Betty and great-granddaughter Kamryn; a daughter, Rebecca Crisman and husband Randall; grandson Kyle Crisman and wife Laurie; great-granddaughter Lexi and grandson Paul Crisman and wife Lauren. He was born and raised in McLean, VA. and graduated from Fairfax High School in 1942. He served in World War II in the Army Combat Engineers in the Pacific Theater. He worked at C & P Telephone Co., at the Pentagon and then the Falls Church office for 20 years. There he met and married Anna Jones in 1948 and they were married for 70 years. He purchased a dairy farm in 1962 in Toms Brook and named it Moo-Manor and operated it until his health caused his retirement. He was saved in 1957 and served at Woodbine Baptist Church in Manassas and then Valley Baptist Church in Edinburg as a deacon, S.S. teacher, S.S. Superintendent, song leader and faithful member for 56 years. The funeral service will be held Wednesday, March 13, 2019, at 2:00 p.m. at Valley Baptist Church on Stoney Creek Blvd, Edinburg, VA. Pastor Chad Estep, Pastor James Bailey, and Pastor Perry Utz will officiate. Burial will follow in Sunset View Memorial Gardens in Woodstock, VA. The family will receive friends Tuesday at the church from 6-8 p.m. Pallbearers will be Roger Pace, Curt Adkins, Richard McDonald, Jeff Stanley, John Cox, Roy Nuckols, Keith Zirkle, and Richard Abbott. Honorary pallbearers will be all of the men of Valley Baptist Church. In lieu of flowers, contributions may be made to Valley Baptist Radio Station WOTC, 408 Stoney Creek Road, Edinburg, VA. 22824 or Toms Brook Fire Department, P.O. Box 168, Toms Brook, VA 22660.

Harry Morgan Morris, 95, passed away peacefully on March 9, 2019, at Shenandoah Memorial Hospital in Woodstock, Va. He was born December 17, 1923, to Lonnie B. and Grace Lee Morris. He is predeceased by four brothers, Otis, Owen, Raymond and... View Obituary & Service Information

The family of Harry Morgan Morris created this Life Tributes page to make it easy to share your memories.

Send flowers to the Morris family.