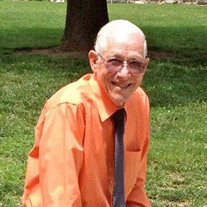 Howard “Hardy” Johnson Lutz, 81, of Woodstock, passed away Sunday, December 16, 2018, at his home. The funeral service will be held Wednesday, December 19 at 11:00 a.m. at Community Mission Church of the Brethren in Woodstock. Pastors Dale Bowers and Diann Whetzel will officiate. Burial will follow in Sunset View Memorial Gardens in Woodstock. The family will receive friends Tuesday from 6-8 p.m. at Valley Funeral Service in Bowman’s Crossing. Hardy was born April 11, 1937 son of the late Roy and Reba McWilliams Lutz. He was born and raised by the river at Camp Lupton, VA. It was during these young years that he found his love for gardening, hunting and the beautiful outdoors. He never felt home any more than he did on his beloved academy farm where he knew every nook and cranny of that river bend and surrounding hollows and mountains. Hardy was married to his beloved wife, Gerlene, for 62 years and often credited her for the success of his achievements. She was his greatest supporter, his closest friend and the love of his life. Hardy started his 30-year career at Safeway in Arlington but spent most of those years as produce manager of the Woodstock store. He loved fruits and vegetables and received many awards for his creative displays. He also learned to love and appreciate people during his career and truly never met a person he couldn’t talk to. After his retirement in 1985, he continued his produce work through his gardening—potatoes, strawberries, pumpkins, cherries, and turnips are a few of the vegetables and fruits he grew by hundreds of bushels, quarts, and gallons over his lifetime. Hardy’s greatest passion and love in his life though was the God he faithfully served. He was called to the ministry in 1972 and ordained by the Church of the Brethren in 1977. He was pastor of Community Mission Church of the Brethren for 38 of his 46-year ministry. He had served at Oak Hill Church of the Brethren for over eight years. During his ministry, Hardy officiated 402 funerals, 300 weddings and held over 100 revival services. He also served as a chaplain at Shenandoah Memorial Hospital for 20 years and served on several C.O.B. district boards, and he loved every minute of it. Hardy is survived by his wife, Gerlene Helsley Lutz whom he married on March 31, 1956; five children, Tim (Donna) Lutz of Toms Brook, Harvey Lutz of Gerradstown, WV., Teresa (Johnny) Richard of Woodstock, Lisa (Dale) Bowers of Woodstock and Herbie Lutz of Mathias, WV.; sisters and brother, Betty Offman of Woodstock, Harold (Roxie) Lutz of Woodstock and Mary (Keith) Cramer of Mt. Crawford; 13 grandchildren and 8 great-grandchildren. Pallbearers will be Sam Lutz, Allen Bowers, Jake Bowers, Joel Bowers, Brent Lutz, and Johnny Richard. In lieu of flowers, contributions may be made to the Community Mission Church of the Brethren Building Fund, 50 Coffmantown Road, Woodstock, VA. 22664. Hardy’s passion to show and tell others of the love and salvation through Jesus Christ never wavered. He loved deeply and was loved deeply by many and his huge smile will never be forgotten.

The family of Howard "Hardy Johnson Lutz created this Life Tributes page to make it easy to share your memories.

Send flowers to the Lutz family.