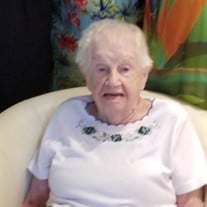 Heishman Funeral Home Inc. sends condolences to the family of Irma Ellen Biehl Mack. Irma Ellen Biehl Mack passed away on New Year’s Eve, December 31, 2019, in the Emergency Room at the Cleveland Clinic, Indian River, FL. Her daughter and son-in-law, Deborah and Tom Coulter, Irma’s long-time caregivers were by her side. She died of natural causes. She was 94, soon to be 95, on February 3rd. She was born in Laurel, Delaware, in 1925 to Olla Beatrice Carey Adkins and Charles H. Adkins. She moved to Baltimore as a young adult where she met and married Harry Edwin Biehl. They had three children…Vivian, Sharon, and Deborah. Edwin Biehl died in February 1970. In 1972, she met Anthony (Tony) Mack who owned the Straw Hat Supper Club in Catonsville, Maryland. Tony was the founder of “The Straw Hatters”…a roaring-twenties’ style band that was well known in the Baltimore-Metropolitan area. They married in 1980, and shared seven wonderful, married years together, before his death in December 1987. She retired from her position as a Payroll Specialist with the Social Security Administration in 1986. She is survived by her daughters Vivian Biehl Gowallis (late husband Richard); Deborah Biehl Coulter and husband Thomas; step-daughters Karen Mack Schott and Linda Mack Miller; her grandchildren Richard A. Gowallis, Jr, Thomas Gowallis, Maria Gowallis Johnson, Charles Wolf, Edwin Wolf, Donna Wolf Horton; her great-grandchildren, Zoe and Izak Johnson; Andrew and Tiffany Wolfe, Ava and Monica Gowallis, Devon Hunt and Nicholas Horton; step-grandchildren Anne Coulter, Jeff Coulter, Amy Schott; and 9 step-great-grandchildren. She is also a beloved Aunt to many nieces and nephews. She is preceded in death her parents; her husbands, Edwin Biehl and Anthony Mack; her beloved siblings Elmer Clifton Adkins, Isabella Mae Adkins Funkhouser, Donald Edwin Adkins; and beloved daughter Sharon Biehl Wolf McCracken. A viewing will be held at the Heishman Funeral Home, 14116 South Middle Road, Edinburg, VA 22824, (540) 984-3700, from 9:30 AM to 10:30 AM on Saturday, January 25, 2020. A “Celebration of Her Life” will follow at 10:30AM in the funeral home chapel. Interment to follow at Saint Paul’s Lutheran Church Cemetery, 4109 Jerome Road, Edinburg, VA 22824. In lieu of flowers, please donate to a charity, of your choosing, in her name.

The family of Irma Ellen Biehl Mack created this Life Tributes page to make it easy to share your memories.

Send flowers to the Mack family.