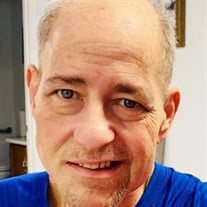 The staff of Heishman Funeral Home/Valley Funeral Service would like to send condolences to the family of Mr. Jeffrey Higgs. Jeffrey Todd Higgs, age 59, of Front Royal, Virginia went home to be with our Lord on January 9, 2022. Jeff was born on January 4, 1963, in Washington, DC and moved to the Front Royal area in his early childhood. He was preceded in death by his father Charles Spencer Higgs, Sr. Jeff’s spirit lives on through his wife of 37 years, Allyson Bowman Higgs, children Spencer, Jordan, and Annah Barrett (Patrick), and grandchildren, Lillian, Elijah, and Charlotte. Jeff is also survived by his mother Fern Lockhart (Johnny), brother Charlie (Lisa), and sister, Terrie Tusing (Dennis), as well as his mother and father-in-law, Don and Jacque Bowman, and numerous family members. Jeff’s most proud accomplishment in life was being a husband, father, and grandfather. Jeff will fondly be remembered by those closest to him as a jokester, always trying to make others laugh. Jeff loved relaxing in his recliner, lovingly sharing his snacks with his three dogs. He graduated with honors from Randolph Macon Academy (RMA) in 1981, where he participated in various sports, band, and extracurricular activities. Jeff enjoyed attending RMA Homecoming and kept in touch with many alumni who he referred to as brothers and sisters. Jeff and Allyson first met as teenagers attending Front Royal United Methodist Church where they later married in 1984. The love they shared led them to build a beautiful life and family together. Jeff’s lifelong career was as a sign/sign supply salesman where his motto was to be a friend to his customers first and a businessman second. Not only did he work tirelessly and without complaint to provide for his family, but he always had time to be a friend to his children. He truly enjoyed celebrating in their joys and offered his best guidance through any struggle. Jeff was a member of Woodstock United Methodist Church and the Upper Room Sunday School Class where he loved worshipping with his friends. The family requests in lieu of flowers, donations may be made in Jeff’s memory to “Pastor’s Discretionary Fund”, Woodstock United Methodist Church, 154 Muhlenberg Street, Woodstock, Virginia 22664. A celebration of Jeff’s life will take place at Front Royal United Methodist Church, 1 West Main Street, Front Royal, Virginia 22630, on Thursday, January 13, 2022. At 11:00 AM for those who wish to attend. A reception will follow.

The staff of Heishman Funeral Home/Valley Funeral Service would like to send condolences to the family of Mr. Jeffrey Higgs. Jeffrey Todd Higgs, age 59, of Front Royal, Virginia went home to be with our Lord on January 9, 2022. Jeff was born... View Obituary & Service Information

The family of Jeffrey Todd Higgs created this Life Tributes page to make it easy to share your memories.

The staff of Heishman Funeral Home/Valley Funeral Service would...

Send flowers to the Higgs family.