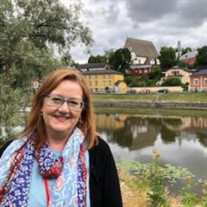 Jennifer Barbour Biller, 50, passed away on December 29th, 2020, at her home in New Market surrounded by her family. Jennifer was born on April 28th, 1970 in Little Rock, AR to Dr. Galen and Carolyn Barbour who survive. Jennifer graduated in 1988 from Warwick High School in Newport News, VA and from the University of Virginia in 1992. She received her Masters Degree in Education from James Madison University in 1993 and worked as a Language Arts teacher at Thomas Harrison Middle School in Harrisonburg, Virginia. On December 13th, 1997, she married Jerry A. Biller from Mount Jackson, who survives. They have two daughters, Virginia Biller, Julia Biller and one son Braxton Biller. Jennifer also is survived by one sister, Dr. April Barbour, and two brothers, Robert Barbour and wife Maura, Dr. John Barbour and wife English. She also has three nieces and three nephews. Her mother and father-in-law are Bobby and Gloria Biller from Mount Jackson who survive. Jennifer had a successful home business of Tupperware from 2001 to 2015 while her children were very young. She went back to teaching in 2017 as a Gifted and Talented instructor at Signal Knob Middle School in Strasburg. She was a member of the Timberville Church of Christ, where she taught children’s classes and was a very active member of the local congregation. The family is asking anyone wanting to make a donation on Jennifer’s behalf to direct those to Sentara Hospice 2010 Health Campus Drive, Harrisonburg, VA 22801 and the American Cancer Society 420 Neff Avenue Suite 210, Harrisonburg, VA 22801. A service will be held at Valley Funeral Service in Edinburg, Saturday, January 2nd at 11:00am. Final resting area will be at Solomons Church in Forestville, VA. Minister Elliott Asbury will be conducting the service. Pallbearers will be Andy Viola, Mike Gantt, Jeffrey Bova, David Palmer, Ethan Palmer and Alex Palmer. Funeral arrangements are in the care of Heishman Funeral Home Inc. Valley Funeral Service Branch, Edinburg. Online condolences may be left at www.valleyfs.com

Jennifer Barbour Biller, 50, passed away on December 29th, 2020, at her home in New Market surrounded by her family. Jennifer was born on April 28th, 1970 in Little Rock, AR to Dr. Galen and Carolyn Barbour who survive. Jennifer graduated in... View Obituary & Service Information

The staff at Heishman Funeral Home Inc. sends condolences to the family of Jennifer Barbour Biller.

Send flowers to the Biller family.