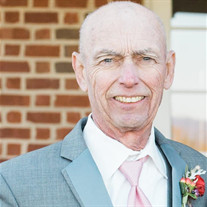 Jerry Allen Middleton, 62, of New Market, passed away Wednesday, August 28, 2019, at Life Care Center in New Market. A memorial service will be held Sunday, September 1, 2019, at 4:00 p.m. at Mt. Jackson United Methodist Church. Pastor Darwin Edwards will officiate. The family will receive friends Saturday, August 31 from 6-8 p.m. at Valley Funeral Service, 14116 S. Middle Road, Edinburg. Mr. Middleton was born September 26, 1956, in Rockingham County, son of the late Charles Allen Middleton and Rachel Good Middleton of Mt. Jackson. He was a 1974 graduate of Stonewall Jackson High School. He had worked at Mansville for 30 years and at Life Care Center until his illness forced him to retire. He was also the owner of C & J Contractors. He bowled on several leagues over the years. He was a very good archer and shot in many tournaments. He enjoyed the outdoors, gardening, hunting, and flowers. He is survived, along with his mother, by his wife, Tammie Edwards Middleton whom he married on August 18, 1979; son Jonathan Middleton and wife Jenn of Rockingham; brother Charles T. Middleton and wife Robin of Middletown. Online condolences may be made at www.valleyfs.com Cremation arrangements by Heishman Funeral Home Inc., Valley Funeral Service Branch, Edinburg, Va.

The family of Jerry Allen Middleton created this Life Tributes page to make it easy to share your memories.

Send flowers to the Middleton family.