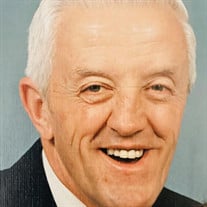 Jimmy Lee Whetzel, 77, of Woodstock passed away at his home surrounded by his loved ones on Monday, January 11, 2021. A graveside service will be held Monday, January 18 at 11:00 a.m. at Massanutten Cemetery in Woodstock. Pastor Dale Bowers will officiate. Friends may sign the guest book from 9-5 on Sunday at the funeral home. Mr. Whetzel was born on September 27, 1943 in Woodstock to the late Carl William Whetzel and Dora Violet Wilkins Whetzel. He was a realtor for Funkhouser Realty and had been President of Massanutten Association of Realtors four times. He retired to farming and grand and great-grandchilldren spoiling. He was a former member of the Woodstock Lions Club. He is survived by his wife, Jean Artz Whetzel whom he married on April 24, 1964; three sons, John (Cris) of Edinburg, Robert (Joyce) of Woodstock, and Jay (Cindy) of Winchester. Jimmy is also survived by his brother, Wayne Whetzel (Nancy) of Edinburg; grandchildren, Ashley Rhodes (David), Tony Whetzel (Mikayla), Matthew Whetzel, Joshua Whetzel, and Nicholas Whetzel; and three great-grandchildren, Zoey, Maison, and Bryson Rhodes. He was preceded in death by a brother, Jack Hottel Whetzel and sister, Eunice Morrow. Jimmy loved his Lord and served Him faithfully with his stewardship to the church, family, and anyone he met. He is remembered for his honesty and workmanship which began at an early age at French Bros. dairy, then 3 different Pence Brothers sales and delivery, managed Tastee Freeze stores, operated his own Poultry House and 3 Bros Furniture Stores. He was also a supervisor at Rocco and The Press. Pallbearers will be Robert Whetzel, John Whetzel, Jay Whetzel, Wayne Whetzel, David Rhodes and grandchildren. In lieu of flowers, donations may be made to: Blue Ridge Hospice, 333 West Cork Street, STE 405, Winchester, VA 22601 or Community Mission Church of the Brethren, 50 Coffmantown Road, Woodstock, VA 22664, Arrangements are in the care of Heishman Funeral Home, Valley Funeral Service Branch, Edinburg.

Jimmy Lee Whetzel, 77, of Woodstock passed away at his home surrounded by his loved ones on Monday, January 11, 2021. A graveside service will be held Monday, January 18 at 11:00 a.m. at Massanutten Cemetery in Woodstock. Pastor Dale Bowers... View Obituary & Service Information

The staff at Heishman Funeral Home Inc. sends condolences to the family of Jimmy Lee Whetzel.

Jimmy Lee Whetzel, 77, of Woodstock passed away at his home surrounded...

Send flowers to the Whetzel family.