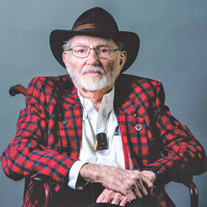 The staff at Heishman Funeral Home send condolences to the family of John Malcolm Billings (Captain John). John Malcolm Billings (Captain John), war hero, aviator, humanitarian, father, husband, and friend passed away peacefully at his home on Friday, March 4th, 2022, at the age of 98, as he completed his final earthly mission. He was born August 7th, 1923, in Winchester, Massachusetts, with his hometown being Scituate, MA. John leaves behind a large legacy of family. First his wife Barbara B. Billings, his younger brother Bruce Billings (Lorraine), his children Susan, Leslie, and Lee Billings. He also has two stepdaughters, Lisa Oleskie (Mike), and Lori Staley. His grandchildren are, Jason Boget (Erin), Christoph Boget (Angie), Brian Boget, Jennifer LeClair (Matthew), Jonathan Billings (Katie), Heather Sanchez (Tito), and thirteen great-grandchildren. Along with his family, he is also survived by his close friend and copilot, Nevin Showman. He was preceded in death by his mother Enid Alisca Bennett Billings and his father Alson Powers Billings, a sister Barbara Appel, a devoted uncle Harry Bennett and his first wife Nancy Gardiner Billings. At the young age of three, the love of flying took hold of John. His father, for his third birthday, bought him a ticket for an airplane ride in a Curtis Robin, and from that day forward his love for flying continually grew. During WWII, John flew B24 Liberators with the Fifteenth Airforce, 53 missions in all, 14 were mass bomb runs with the 484th Bomb Group, and 39 were OSS top-secret covert missions with the 885th, one of which was determined to be the most successful intelligence gathering missions of the war... Operation Greenup, for which Captain John received the Distinguished Flying Cross. After the war, John continued his love of flying, spending one year with Trans World Airlines (TWA) and thirty-five years with Eastern Airlines, from which he retired in 1983 at the age of 60 (mandatory retirement age at the time). From there the love did not stop, it just got stronger. John continued flying in general aviation, and in February of 2005 he completed his first Angel Flight Mission, transporting those in need at no cost... and 462 missions later, on August 11th, 2021, he completed his last, 5 days after his 98th birthday! One month later he flew his airplane to Albuquerque, NM for his Bomb Group reunion which he had so much loved attending for the past many years. Even after all this, the love of flying continued, each week he and Nevin would (if possible) head to the airport and take to the skies, relieving their feet from the pain of being on the earth too long, a feeling of which only a pilot would truly understand. They continued doing this up to just 4 weeks before his passing! For all the many years of dedicated service and his love of flying, John received many acknowledgments. The following are just a few... The Distinguished Flying Cross, Wright Brothers Master Pilot Award, OSS Distinguished Service Award, The Prestigious Endeavor Award, Virginia Angel Flight Pilot of the Year Award (multiple times), Mid-Atlantic Angel Flight Pilot of the Year Award, and The Presidents Lifetime Achievement Award. John's warm infectious smile, big heart, and love for country, friends, family, and flying have reached far and wide... certainly making the world a much better place for him being in it. His passing is a big loss, but the wonderful memories so many have been left with will be the strength needed to carry on. John would often remark that even his worst flight ever was most delightful, so now that he has departed this earth on his eternal flight, one would have to believe that this one will be the greatest of them all! We feel blessed that we were able to care for him till the end at home in the Grog (great room over the garage), this was his favorite place in our home. How he loved this home in the beautiful Shenandoah Valley. Those who knew and loved John will always think of him whenever a little airplane flies over. It was Johns's sincere wish that following his death there would be no services. Online condolence may be left at www.valleyfs.com Arrangements are in the care of Heishman Funeral Home, Inc., Valley Funeral Service Branch Edinburg, VA.

The family of John Malcolm Billings (Captain John) created this Life Tributes page to make it easy to share your memories.

The staff at Heishman Funeral Home send condolences to the family...

Send flowers to the Billings family.