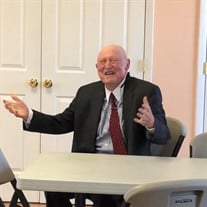 John Morgan Bauserman of Woodstock, teacher, coach and historical researcher, died Friday, July 5 at University of Virginia Hospital in Charlottesville after a brief illness. He was 81. Until retiring in 1998, Mr. Bauserman taught in the public schools of Culpeper, Shenandoah and Loudoun Counties for more than 30 years. In the 1980s he coached the Central High School football team to a co-championship of the Group II Valley District and the school’s best record in the sport until that time. Though he taught physical education, English, economics and geography, history was his passion. He spent 10 years researching a December 1944 battle between German and American forces at the Belgium town of Malmedy, work that eventually earned Mr. Bauserman Loudoun County’s nominee for the Outstanding Teacher-Historian in the Washington Area from the United States Historical Society in 1990 and a Congressional Commendation for his book, The Malmedy Massacre. In 1991, he was enlisted by the United States Information Agency as a subject matter expert and script consultant for a documentary produced on the Malmedy Massacre. His forebears were among Shenandoah County’s earliest settlers and most prominent families. Originally spelled Bosserman, the family migrated to an area east of Maurertown as early as 1765, later owning large tracts of land at Woodstock extending west from what today is Summit Avenue. He spent years researching family history. Though he spent much of his later life in research, a 1957 feat of daring earned Mr. Bauserman a reputation he carried for life. He and two other young men, all lifeguards at the Woodstock town pool, attempted to raft across Burnshire Dam at flood stage. Mr. Bauserman was rescued quickly, but the other two were forced to cling to tree branches for hours while townsfolk struggled to rescue them. Eventually, all were brought to safety, but the incident was fodder for community conversation for years. John (Jack) Bauserman was born in Washington, DC on Nov. 5, 1937, eldest of two children of John Vawter and Susan Nicholson Bauserman. A sister, Winifred, is deceased. Surviving are his wife, Joy W. Bauserman; sons J.D. Bauserman of Tallahassee, FL and Joseph Bauserman of Woodstock; a daughter-in-law Katie Kees Bauserman of Woodstock and grandchildren Sarah Lynne Bauserman of Tallahassee, FL and Andrew Morgan Bauserman of Orlando, FL. Until graduating in 1955, he played baseball and football at Massanutten Military Academy. He spent summers playing baseball for the Woodstock Town Team and The American Legion. He was drafted by The Pittsburg Pirates, but he never reported to play. He enlisted in the U.S. Army in 1957 and served in Germany. After serving in the Army, he played baseball and football at Lenoir-Rhyne College in NC competing in a National Championship football game. He graduated from Lenoir Rhyne in 1962 and served in the U.S. Air Force. He later earned a master’s degree from James Madison University. He was a member of Emmanuel Episcopal Church in Woodstock and was currently serving on the Vestry as Junior Warden. A celebration of his life will be held on August 3, 2019 at 10:30 at Emmanuel Episcopal Church, 122 E. Court St., Woodstock, VA. In lieu of flowers, donations can be made to the Emmanuel Episcopal Church children’s scholarship fund for the Episcopal Camp at Shrine Mont and to the UVA Health Foundation, P.O. Box 800773, Charlottesville, VA 22908-0773 or [email protected] Arrangements are in the care of Heishman Funeral Home, Inc, and Valley Funeral Service Branch, Bowmans Crossing. Online condolences may be left at www.http://valleyfs.com

John Morgan Bauserman of Woodstock, teacher, coach and historical researcher, died Friday, July 5 at University of Virginia Hospital in Charlottesville after a brief illness. He was 81. Until retiring in 1998, Mr. Bauserman taught in the public... View Obituary & Service Information

The family of John "Jack" Morgan Bauserman created this Life Tributes page to make it easy to share your memories.

Send flowers to the Bauserman family.