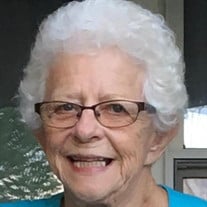 Heishman Funeral Home Inc. sends condolences to the family of Joy Ruchtie Fisher. Joy Ruchtie Fisher, 75, of Maurertown, died on April 21, 2020. She was born June 13, 1944, in East Stroudsburg, Pennsylvania. She spent her early years living in Tannersville, Pennsylvania; Sebring and Avon Park, Florida; and Strasburg, Virginia. While attending Strasburg High School, she met Harold Clark “Pete” Fisher, whom she married on August 3, 1962. She was a long-time member of Zion Christian Church in Maurertown and a member of the National Rural Letter Carriers’ Association. She retired after working for 25 years with the United States Postal Service at the Winchester Post Office. Following her retirement, Joy loved to travel. She visited several foreign countries as well as numerous U.S. states. Her favorite trips, though, were made with her children. She especially enjoyed revisiting locations from her youth and sharing those “stomping grounds” with her kids and grandkids. Joy spent a lifetime gardening and cultivating beautiful flowers. She developed this interest at an early age as she worked in her parents’ successful garden center businesses—first in Pennsylvania and then in Strasburg. She even dressed in authentic Dutch costume while helping customers. Joy had numerous hobbies including reading, sewing, playing cards, and painting. In fact, many of her oil and acrylic paintings received ribbons at the Shenandoah County Fair. She was devoted to animals, especially her pet cats and dogs. Most of all, she valued time with family and was always excited to host cookouts and pool parties. She enjoyed church socials and monthly gatherings with a group of former high school classmates. She became interested in her family’s genealogy and collaborated with her daughter-in-law in the recent publication of a book called Sharing Joy: My Mother, My Mom, and Me. She was preceded in death by her mother, Louisa Adriana Carolina (Laarhuis) Ruchtie; her father, Jan “John” Herman Ruchtie; her mom, Margaret “Marge” (Koch) Ruchtie; her beloved husband, Harold Clark “Pete” Fisher; and her dear grandson, Clark Alan Shelton. She is survived by two daughters: Tammy Cecil (Tom) of Fort Valley and Cathy Fisher of Spotsylvania; by one son: Harold Fisher (Jaree) of Greenbrier, Arkansas; by three grandchildren: Megan Elizabeth Shelton of Bunker Hill, West Virginia, and James Harold Fisher and Lillian Adriana Fisher of Greenbrier, Arkansas; by three great-grandchildren: Liam Avery Crouse, Cohen Fisher Cernoch, and Thatcher Fitzgerald Cernoch; and by special family friend Scott Clark. She will be greatly missed by her family and numerous friends. Because of social distancing concerns, a Celebration of Life will be held at a later date. Her cremains will be interred in the Zion Christian Church Cemetery. In lieu of flowers, the family suggests that memorial gifts may be made to the Breast Cancer Research Foundation or to the American Cancer Society.

The family of Joy Ruchtie Fisher created this Life Tributes page to make it easy to share your memories.

Send flowers to the Fisher family.