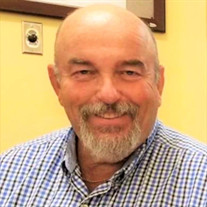 The staff at Heishman Funeral Home Inc. sends condolences to the family of Kenneth Eugene "Kenny" Rinker. Kenneth Eugene “Kenny” Rinker, 64, died Tuesday, Aug. 18, 2020, at University of Virginia Medical Center after an 8-month heroic battle fighting complications stemming from a liver transplant last year. Kenny was born May 1, 1956, in Augusta, WV, to Lloyd and Violet Rinker of Augusta, WV, both of whom survive him. With their enthusiastic encouragement, Kenny laid the foundation for his future career in athletics by playing sports as a boy. He was a letterman at Hampshire High School in Romney, WV, in both football and baseball. He received a football scholarship to attend James Madison University, graduating in 1978, with a bachelor’s degree in math and history. His first teaching and coaching position right after college was at Central High School in Woodstock. Two years later, he would go to Stonewall Jackson High School where he took on the position of head varsity football coach and varsity girls softball head coach. He led the softball team to a State Championship in 1983. This was a special team to him. From 1987 to 1989, he coached and taught at Harrisonburg High School, before returning to Central for the remainder of his career, retiring in 2018 after 40 years in education and athletics. He was head coach for varsity football, varsity girls softball and JV girls basketball at CHS during his tenure. He especially loved his position as athletic director (2010-2018) and took pride in keeping the athletic fields in excellent condition. Kenny received the Central High School Lifetime Achievement Award when he retired in 2018. He also was awarded the Virginia High School League Regional Administrator Merit Award in 2018 and was a four-time recipient of the Claudia Dodson Sportsmanship, Ethics and Integrity Award. Kenny also served as a basketball referee (when his knees were younger) and as a baseball/softball umpire with the Harrisonburg Umpire Association where he made many lifelong friends. In 2001, he took the editor of the local newspaper out on a date and seven months later he married Cindy Earehart Rinker. They were the perfect match of opposites (think math and English majors). Together, they raised eight rescue/shelter dogs: Brownie, Tip, Major, Buddy, Peanut, Roxi, Mia and PeeWee. He loved his dogs and missed them terribly when he was in the hospital. The pride of his life was his lovely daughter, Olivia Donald, and her family. Grandkids Grace and Sam loved their Granddaddy and frequently used him as their playground. Just the mention of their names would bring a smile and light his eyes. He appreciated his son-in-law Webb as a good husband and father. It gave Kenny peace to know his daughter was well-cared for. Kenny was a member of Woodstock United Methodist Church where he served on several committees and was a lay reader. In addition to his parents, he is survived by his wife, Cindy of Maurertown; his daughter, Olivia (Webb) of Draper; grandchildren Grace Tiller Donald and Samuel Everett Donald, also of Draper; brother-in-law, Scott Earehart (Carrie) of Clemmons, NC and niece Gracilyn Earehart of Wilmington, NC. He also is survived by three close cousins he grew up with, Jimmy Rinker and Bob and Mike Hogbin, all of Romney, WV. And a special friend and hunting partner, Anthony Riffey of Edinburg. A celebration of life will be held 11 a.m. Saturday, Aug. 22, on the football field at Central High School. The Rev. Rob Hoskins will officiate. This location will accommodate social distancing guidelines, but please wear a mask and resist the urge to hug. Please bring a lawn chair. In lieu of flowers, the family would like you to consider making a donation to the Kenny Rinker Good Sportsmanship Scholarship which will be started in his name at Central High School. Send your donation to Central High School Athletic Boosters Club c/o Melissa Rice 1147 Susan Ave, Woodstock, VA 22664 with the scholarship name on the memo line. The family would like to extend their thanks to the amazing doctors, surgeons, nurses, techs and staff of Fourth Floor Central Transplant at UVA, and those of the ICU who were so kind in his last hours. He received a lot of love and would want us to properly thank them. Online condolences can be left at www.valleyfs.com Arrangements by Heishman Funeral Home Inc., Valley Funeral Service Branch, Edinburg.

The family of Kenneth Eugene "Kenny" Rinker created this Life Tributes page to make it easy to share your memories.

Send flowers to the Rinker family.