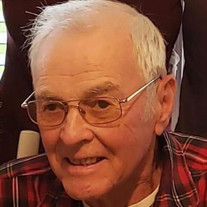 The staff at Heishman Funeral Home Inc. sends condolences to the family of Leonard Leon Rosenberger. Leonard Leon Rosenberger, 84, a lifelong resident of Toms Brook, VA, passed away peacefully on May 6 surrounded by his loving family. He was born August 6, 1937. Leon was preceded in death by his mother, Kathryn Anderson. For 66 years he was married to his devoted wife Janice (Kibler) Rosenberger and was blessed with three children: Danny Rosenberger (Brenda), Cindy Stokes (Bill), and Robert Rosenberger (Brandi). In addition to his wife and children, Leon was extremely proud of his grandchildren: Jason Wymer, Andrew Dellinger, Kristin Wilson, Danielle Lutman, Madison Estep, and Reese Estep. He loved his five great-grandchildren: Gavin, Alayna, and Brant Dellinger, and Caleb and Sawyer Lutman. His sister, Donna Pepper resides in Florida. From an early age Leon could best be described as proud and hard-working. He began a newspaper route at nine years old, and at twelve he started milking cows and farming, which he continued every day for the rest of his life. In 1955, while farming morning and evening, he began a huckstering route in the Northern Virginia area that he would work for forty years. Leon also drove bus #16 for Shenandoah County Public Schools for many years. Leon took great pride in his family and farming with them in Toms Brook. He strived to keep his farm and equipment in its best shape. His great smile after telling a corny joke was contagious. He taught Sunday School, enjoyed hunting with good friends from the Sugar Hill Hunt Club, fishing, and water skiing on the Shenandoah River. Later in life he made daily rounds in his truck, checking on the places and people that he loved. Over the years, Leon cared very deeply for his beloved dogs: Buck, Jake, Flash, Lucky, and Bella. He took them for daily truck rides and runs along the river on the "Pizza Man's" farm. The family would like to thank the staff of Blue Ridge Hospice and Greenfield Assisted Living (Strasburg) for their kindness. In lieu of flowers contributions may be made to Blue Ridge Hospice, 333 W. Cork St Suite 405, Winchester, VA 22601 or the Shenandoah County Animal Shelter, 268 Landfill Road, Edinburg, VA 22824. A graveside service will be held on Thursday, May 12, 2022, at 2:00pm at Sunset View Memorial Gardens in Woodstock. Family and friends can sign the book 9am-5pm Wednesday or until noon on Thursday at Valley Funeral Service in Edinburg. Online condolences can be left at www.valleyfs.com Arrangements by Heishman Funeral Home Inc., Valley Funeral Service Branch, Edinburg.

The staff at Heishman Funeral Home Inc. sends condolences to the family of Leonard Leon Rosenberger.

Send flowers to the Rosenberger family.