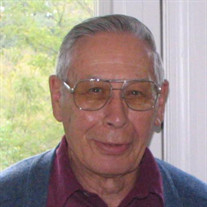 The Reverend Lewis Crockett Huddle, 93, of Woodstock, returned to the arms of his Lord on Monday, January 11, 2021. Crockett was born on December 19, 1927, in Wythe County, VA, and was the son of the late Lewis G. Huddle and Virginia Huddle. Crockett graduated from Roanoke College in 1949 and received a Master of Divinity from the Lutheran Theological Southern Seminary in 1954. He was ordained on May 30, 1954 at Holy Trinity Lutheran Church in Wytheville, VA. Pastor Huddle served as Organizer and Pastor of St. Timothy Lutheran Church in Norfolk, VA from 1954 to 1958. He served as Pastor of the Floyd-Willis Parish (Floyd County, VA) from 1958 to 1961, the Bristol, VA-TN Parish from 1961 to 1965, the Rockingham Lutheran Parish (Rockingham & Augusta counties, VA) from 1965 to 1975, and the Quicksburg Parish (Shenandoah County, VA) from 1975 to 1979. He retired in January 1992 after serving Faith Lutheran Church in Fort Valley, VA from 1979 to 1991. Throughout his ministry he preached in over 65 churches and served in several capacities for the VA Synod of the Lutheran Church in America. Crockett enjoyed gardening, travelling, playing golf and bowling in his spare time. He played golf on 162 courses in 14 states. He visited all 50 U.S.A. states, 2 U.S.A. territories, 12 Canadian provinces and territories as well as 15 foreign countries. Pastor Huddle is survived by his three children, Carolyn H. Glasgow and husband, William “Bill”, of Largo, FL; Deborah Huddle of Fredericksburg; and Joseph Huddle and wife Holly of Woodstock and their children Hannah and Darien. Crockett leaves behind one sister, Nancy Huddle Elvetici and husband, Richard, of Wytheville, and one brother-in-law, Kenneth B. Kincer of Prince George. He is also survived by several nephews, nieces and cousins. He was preceded in death by his wife, Cora B. Huddle and his sister, Frances Huddle Kincer. A private graveside service will be held at Sunset View Memorial Gardens, Woodstock, VA. A memorial service will be held at a future date. In lieu of flowers, memorial contributions may be made to the ELCA World Hunger effort online at https://www.elca.org/hunger or through your local ELCA congregation. Online Condolences can be left at www.valleyfs.com Arrangements by Heishman Funeral Home Inc., Valley Funeral Service Branch, Edinburg.

The Reverend Lewis Crockett Huddle, 93, of Woodstock, returned to the arms of his Lord on Monday, January 11, 2021. Crockett was born on December 19, 1927, in Wythe County, VA, and was the son of the late Lewis G. Huddle and Virginia Huddle.... View Obituary & Service Information

The staff at Heishman Funeral Home Inc. sends condolences to the family of Lewis Crockett Huddle.

Send flowers to the Huddle family.