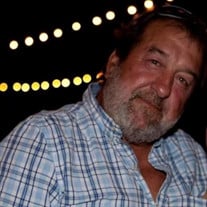 Michael Lane Miller, AKA Mike, AKA Daddy, AKA PawPaw, AKA Er, AKA Beak, from Mt. Jackson, VA passed away on Saturday, May 30, 2021 after a long battle with lung cancer. After several months of declined health, he passed away peacefully at his home with family by his side. His departure was just in time to make his spiritual appearance at every race this season. Michael was born on June 17, 1956, at Woodstock, Virginia, he was son of the late James Albert “Big Jim” Miller and Betty Jean Rinker Miller Longerbeam. He was also preceded in death by his infant daughter, Michelle, Sisters, Debra Custer and Judy Coffman. Michael is survived by his wife, Kitt Klein; a son, Travis Miller (Nichol); a daughter, Kasey Fuller (Joshua); three sisters, Patty Riffey, Lisa Burner (Hector), Lori Robinson Timmy; five brothers, Lonnie Fadley (Pam) Dennis Fadeley, James Miller, III, (Carolyn), Kevin Miller (Brenda), and Kim Miller (Janet); five grandchildren, Wyatt, Kyra, Stella, Madison, Emmalyn. In addition to his immediate family, Mike leaves behind an incredible extended family and many, many, many friends. If you knew Mike, you knew how to laugh, and if you didn’t have a sense of humor, I’m sure he nagged until you did, walking away with a new friend for life. One of a kind, who enjoyed being the center of attention and life of the party. He was a magnet for fun. An adrenaline junky, he was a race car enthusiast dabbling in quarter miles “Miller Time” and dirt tracks “69.” His love for dirt racing took him and his wife Kitt Klein in their winnebago to and from tracks south and west. He had a big heart and enjoyed the company of most. He probably told you he loved you and meant it, sober or not. During his time here he found a way into many hearts. He loved his wife, his incredible kids, rock star grandchildren, his family, friends, racing, camping, 62’ Novas, motorcycle rides, drying out BBQ, burnt steaks, McNaughten and Coke, the winning team, and half and half iced tea. His work ethic and desires to take care of his families needs led him to begin his own his entrepreneurship, Miller's Painting, where he served the Valley for 3 decades. Mike’s passing leaves a void that will never be filled, yet at the same time leaves a piece of himself in the heats of so many to be carried forward. We love you Mike, Our lives have been so deeply touched, we will never be the same, and we are so much richer because of you. Rest high on that mountain. Eternal gratitude and laughter. The family will receive friends Wednesday, June 2, 2021, at Valley Funeral Service from 6 to 8 PM, where a funeral service will be conducted on Thursday, June 3, 2021, at 10:30 AM by Rev. Larry Miller. Burial will be private. Following the burial their will be a Celebration of Life at the Mount Jackson Moose. The arrangements are in the care of Heishman Funeral Service, Inc. and Valley Funeral Service Branch, Bowman’s Crossing.

Michael Lane Miller, AKA Mike, AKA Daddy, AKA PawPaw, AKA Er, AKA Beak, from Mt. Jackson, VA passed away on Saturday, May 30, 2021 after a long battle with lung cancer. After several months of declined health, he passed away peacefully at his... View Obituary & Service Information

The staff at Heishman Funeral Home Inc. sends condolences to the family of Michael Lane Miller.

Michael Lane Miller, AKA Mike, AKA Daddy, AKA PawPaw, AKA Er,...