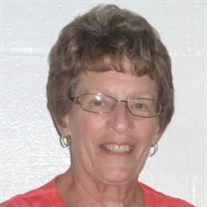 The staff at Heishman Funeral Home Inc. sends condolences to the family of Nancy Ellen Bemis Painter "Nan-Nan". Nancy Ellen Bemis Painter, 88, passed away on March 7th surrounded by her children. She was born July 21st, 1933 in Woodstock, Virginia to the late Harry Stanford and June Crabill Bemis. Nancy graduated from Toms Brook High School in 1951. She was a member of Toms Brook United Methodist Church and actively attended Community Mission Church of the Brethren. Nancy enjoyed volunteering for her community. Many young women were influenced by Nancy as she was a Girl Scout member and leader for 30 years. Later in life, she volunteered by welcoming patients and their families as they entered Shenandoah Memorial Hospital at the front desk as well as the gift shop. Nancy was married 55 years to the late Glenn “Jack” Painter. Together they lived on a farm in Toms Brook for over 50 years where they raised their four children. They moved to Woodstock in 2002 where they enjoyed a simpler life. In addition to caring for her family, Nancy enjoyed working at Ben Franklin, substituting in the school cafeteria, Par “T” Plus, and Dalke’s Theater. She was quite the social butterfly and she never met a stranger. Nancy was often greeted with the nicknames “Nan-Nan” or “Momma” and a big hug. Her family was the light of her life. Nancy would share a picture or a story about them with any opportunity. Nancy is preceded in death by her parents and husband. She is also preceded in death by her son Craig Bemis Painter, daughter-in-law Joanne Coverstone Painter, cousin Joseph “JB” Crabill, and her beloved dog Pumpkin. She is survived by her three children: son Michael Painter and wife Patty of Strasburg, daughter Glenda Funk of Woodstock, and daughter Holly Markley and husband Darrin “Toby” of Edinburg. Nancy is also survived by her six grandchildren: Alicia Bly and husband Jeff, Gretchen Brill and husband Keith, Brigette Funk, Hunter Funk and wife Ginny, and Whitney and Tucker Markley. She is further survived by her great-grandchildren: Jaydn, Samantha, and William Bly, Karaline and Kerrigan Brill, and an exciting new addition in May. All those who wish to pay their respects to Nancy and family may do so at Heishman Valley Funeral Chapel 14116 S. Middle Rd., Edinburg, VA 22824 on Thursday, March 10th from 6pm to 8pm for family night. A funeral service will be held at Heishman Valley Funeral Chapel on Friday, March 11th at 2pm. Graveside, following the service, will be private. In lieu of flowers, memorial contributions in Nancy’s honor may be made to Woodstock Volunteer Rescue Squad or Community Mission Church of the Brethren, 50 Coffmantown Road, Woodstock, VA 22664. Pallbearers will be Michael Painter, Darrin “Toby” and Tucker Markley, Hunter Funk, Keith Brill, Jeff and William Bly Honorary pallbearers will be Kenneth “Monk” Jackson, David Gochenour, George Taylor, Becky Lytton, Peggy Crook, Ken Hunter, and Shirley Jett.