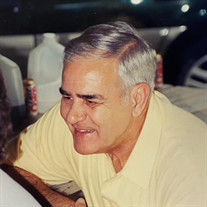 Nolan Lee “Buddy” Green, 81, of Mount Jackson, went home to be with his Lord and Savior on Friday, July 9, 2021. Nolan was born on November 9, 1939, at Mount Clifton, Virginia. He was the son of the late George R. Green and Mildred Stroop Green Sherman. He served honorably in the U. S. Army from 1957 to 1960. In addition to his parents, Nolan was preceded in death by his brother, Freeman D. Green. Nolan is survived by the love of his life, Helen Good Green, whom he married on August 6, 1960. He is also survived by sisters, Linda Kay Green Phillips and Karen Faye Green Lankard (Robert); a brother, Larry W. Green; daughter, Kimberly Green Lamp (Richard); sons, Jeffrey Green (Diane), Ronnie Green (Gina); five grandchildren and four great grandchildren; several nieces and nephews. Buddy loved all his family dearly and especially knew and loved his Lord and Savior. Buddy was a tractor trailer driver most of his life. He was known as a hard worker, often holding several jobs at the same time. He had a pleasant sense of humor and the ability to set you up for a joke without warning. Buddy would help anyone he could without thought of reward. Because he was such a good and decent man, there are many who appreciated his life and will morn his passing. Buddy attended Triplett High School and received an associate degree in Police Science from the Central Piedmont Community College, Charlotte, NC. In Lieu of flowers memorial contributions may be made to the Mount Jackson Rescue and Fire Department. Friends may pay their respects from 9 to 5 PM on Tuesday, July 13, 2021, at Valley Funeral Service, where services will be held on Wednesday, July 14, 2021, 2:00 PM with Rev. Larry Rinard officiating. Burial will follow at the Mount Jackson Cemetery. Online condolences may be left at www.valleyfs.com. The arrangements are in the care of Heishman Funeral Service, Inc. and Valley Funeral Service Branch, Bowman’s Crossing.

Send flowers to the Green family.