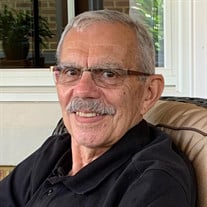 To be absent from the body is to be present with the Lord Norman (Norm) Leonard Kerber, 79, of Woodstock, passed away Saturday, December 11, 2021, at his home with his wife by his side. The funeral service will be held Saturday, December 18 at 11:00 a.m. at Antioch Church of the Brethren. Pastors George Bowers and Brian Duncan will officiate. Burial will be private. He was born September 5, 1942, in Chatsworth, Illinois, son of the late Leonard Charles Kerber and Ruth Clark Kerber. He is survived by his wife of 56 years, Shirley Cave Kerber whom he married on July 31, 1965; two brothers, Michael Kerber and wife Cindy of Bloomington, IL., and Mark Kerber and wife Diane of Chatsworth, IL.; sisters-in-law, Nancy Mumaw and Faye Cullers of Woodstock; brother-in-law, Larry Cave of Fort Valley; nephews, Andy Cullers and Nathaniel Burner of Fort Valley, VA., Aaron Cave and Mike Mumaw of Edinburg, VA., Gregory Hoover of Woodstock, VA., Steve Hoover of Lewisburg, PA., David Kerber of Dekalb, IL., Paul Kerber of Altona, WI., Christopher Kerber of Forrest, IL:., Jeffrey Kerber of Klamath Falls, OR., and Niece, Shelly Eye of Woodstock, VA. He was preceded in death by niece Sherry Kerber of Chatsworth, IL. After graduation from Chatsworth High School in 1960, Norm served in the United States Air Force in Texas, Istanbul, Turkey and Andrews Air Force Base in Camp Springs, MD. Norm worked for Washington Gas Light Company for 31 years. He worked as Appliance Serviceman, engineer in the total Energy Department, Foreman of the Carpenter Shop, and became Chief Engineer of the Facilities Department, retiring in 1996. Norm worked for the National Geographic Society in Washington, DC as an Operating Engineer in the HVAC area of the facilities until his retirement there in 2004. After retirement, Norm and his wife Shirley moved to Woodstock, VA. Norm held various part time positions in the community but loved his position of being a substitute bus driver most of all. He loved the children and his interaction with them. He was a member and served as treasurer of the Skyline Street Rods and had a passion for older cars. Norm was a member of Antioch Church of the Brethren, where he served as Trustee and on the Mission and Witness Commission. Norm completed various disaster mission trips to New Orleans, Nashville, Indiana and New Windsor, MD. While at Antioch, Norm played an active role on the Long Range Planning Committee and Building Team during the planning and building of a new fellowship hall and sanctuary. Norm loved going home to his home place where he grew up on the farm in Illinois and being involved in the harvest each fall. He loved Bluegrass music and he and Shirley attended many Bluegrass Festivals and Cruises. They also loved to travel. In lieu of flowers, contributions may be made to Antioch COB Building Fund or charity of your choice. Online condolences may be left at www.valleyfs.com Arrangements by Heishman Funeral Home Inc., Valley Funeral Service Branch, Edinburg.

To be absent from the body is to be present with the Lord Norman (Norm) Leonard Kerber, 79, of Woodstock, passed away Saturday, December 11, 2021, at his home with his wife by his side. The funeral service will be held Saturday, December 18... View Obituary & Service Information

To be absent from the body is to be present with the Lord
Norman...

Send flowers to the Kerber family.