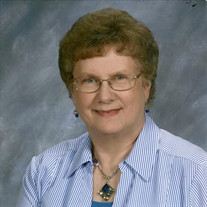 Patsy Jane Trimble Heishman, age 84, of Fort Valley, passed away on October 30, 2018, at Inova Fairfax Hospital in Falls Church, Va. Patsy was born in Bridgewater on November 19, 1933. After moving around the region several times, her family settled in Woodstock where she spent most of her childhood. She was the daughter of the late Roy Philip Trimble and Carrie Belle Hayes Trimble. She was a graduate of Woodstock High School in 1951 and then continued her education at the Palmers Business School. In the early 1950’s Patsy met her darling Charley Heishman and they married on May 28, 1953, and were happily married for 65 years until his death. During the early years of their marriage, Patsy joined Charley as he served as a medic in the U.S. Navy. After leaving the Navy, Patsy and Charley returned to the family farm in Fort Valley. Where Patsy claimed never to have acquired the lifestyle of a farmer’s wife, she began to love the pastoral life on the farm. She enjoyed her children and grandchildren and would frequently take pictures of them and make scrapbooks of special events in their lives. She loved to take them shopping and was very fashionable, owning various canes to match her outfits. During her lifetime, she worked as a bookkeeper for Wenders clothing store and as a clerk and buyer for Leggett's Department store for 25 years. Patsy was preceded in death by her husband, Charles Heishman and her siblings, Phyllis Trimble Morris (Tom), Madge Eloise Trimble Racey (Kermit); and a niece, Mary Heishman Makely, (John), who was like a daughter. She is survived by three children, Diane Heishman LaFever (Dana), Steven Trimble Heishman (Becky), and Lorin Heishman Crowder (Jeff); seven grandchildren, Dana George Liscio (Matt), Aimee George, Taylor LaFever, Beth Heishman Orndorff (Brian), Carie Heishman Neal (Trey), Daniel Crowder (Ellen) and Sarah Crowder; three great-grandchildren, Charlotte Belle Orndorff, Steven Matthias Orndorff, and Lena Mae Orndorff. The family will receive friends Friday 6-8 pm at Valley Funeral Service. Her memorial service will be held at Faith Lutheran Church in Fort Valley on Saturday, November 3, 2018, at 11 a.m. by Pastor Todd Crowder. In lieu of flowers, memorial contributions may be made to Fort Valley Rescue Squad, 7064 Fort Valley Road, Fort Valley, VA 22652.

Patsy Jane Trimble Heishman, age 84, of Fort Valley, passed away on October 30, 2018, at Inova Fairfax Hospital in Falls Church, Va. Patsy was born in Bridgewater on November 19, 1933. After moving around the region several times, her family... View Obituary & Service Information

The family of Patsy Jane Trimble Heishman created this Life Tributes page to make it easy to share your memories.