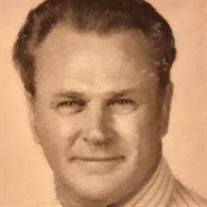 Heishman Funeral Home Inc. sends condolences to the family of Ralph Henry Combs. Ralph Henry Combs, 92, passed away on November 20, 2019. He was born January 7, 1927, in Baughman Settlement near McCauley, West Virginia, son of the late William Luke Combs and Jenettie Miller Combs Klopp. His wife of more than 65 years, Charlotte Morrison Combs, predeceased him on December 16, 2013. At 17, Ralph joined the US Navy and served aboard the aircraft carrier the USS Bonhomme Richard in the Pacific Theater of operations during WWII, being awarded two Bronze Stars for his service. Returning to Woodstock after the war, he completed his education and graduated from Woodstock High School in 1947. After high school, he worked the next 5 years for the VA Department of Highways as a Bridge and Highway Inspector. Beginning in 1951, he was employed at the Woodstock Garage, starting first as a mechanic in the service department, then head of the paint and body shop before being promoted to manager of the sales department until retirement in 1991 after 40 years of service. In retirement, Ralph built, and with his wife Charlotte, managed the Woodstock Self Storage business on US Route 11. He also was an independent dealer for Hearthstone Log Homes. Ralph was a life member of the American Legion, Veterans of Foreign Wars, and the National Rifle Association. He was a past president of the Woodstock Lions Club and received the Golden Lion Distinguished Service Award. He enjoyed participating in the Woodstock Follies to raise money for local charities. A supporter of the Boy Scouts of America, Ralph, was awarded The Silver Beaver, the highest adult volunteer honor for his dedication and support for volunteering 55 years. He was a longtime member of the Woodstock Emanuel Lutheran Church. Ralph is survived by his four children, Sandy Comar of Woodstock, VA, Julie (David) Coffman of Troy, VA, Ralph (Maripeg) Combs of Winchester, VA, and Bryan (Patty) Combs of Edinburg, VA; eight grandchildren, Ryan (Dianna) Coffman, Mark Coffman, Will (Kara) Combs, Sam Combs, Lynn (Jake) Sowers, Michael Combs, Emily (Chris) Laurence, Lindsay (Zachary) Wolverton, and three great-grandchildren, Taliesen Combs, Ryland Coffman, and Lucas Laurence. He was preceded in death by three sisters, Nellie Villani of Enola, PA, Mabel Jones Grove of Woodstock, VA, Pleasant Gilboy of Enola, PA and one brother, Harry Combs of Woodstock, VA, and son-in-law, Peter Comar of Woodstock, VA. He is also survived by numerous cousins, nieces, nephews, and friends. A Celebration of Life for Ralph will be held Saturday, January 11, 2020 at 1:00 p.m. at Emanuel Lutheran Church, 127 East High Street, Woodstock, Virginia with Pastor Nathan Robinson officiating.

The family of Ralph Henry Combs created this Life Tributes page to make it easy to share your memories.

Send flowers to the Combs family.