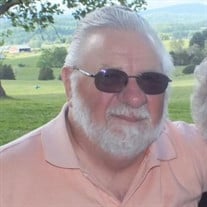 Heishman Funeral Home Inc. sends condolences to the family of Ralph E. Rupert. On Friday morning, May 1, 2020, Ralph E. Rupert entered his heavenly home while holding onto his wife’s hand. Ralph and Judy were married on June 28, 1964 and spent over 55 years living out their vows of “for better or worse, in sickness and in health.” Ralph was born in Macanie, Virginia on October 15, 1940, a loving son of the late William T. Rupert and Ruby Funkhouser Rupert. He truly never got over losing his parents and his beloved sister, Joan D. Rupert, in a short 18-month period. He graduated from Triplett High School in 1959. At the young age of 20, while serving in the United States Air Force, Ralph developed a rare disease which would later be diagnosed as Melkerson-Rosenthal Syndrome. He battled this deteriorating disease for over 59 years. Despite the daily challenges and changes to his body, both inside and out, Ralph went on to work for the Virginia Department of Transportation until his illness forced him to retire in the mid-70’s. It was then that he trained under the late Jake Sheetz and Ron Sheetz and found a new love in woodworking. Ralph proceeded to build new furniture and refinish antiques for many people near and far. He took great pride in his work and was truly a perfectionist in each piece he crafted. His shop was one of his favorite places to be. Later in life, Ralph was able to spend time attending antique car shows. He cherished the days spent with Larry Schaeffer, Buddy Polk, Tommy Hepner, and Dale Hansberger. He met so many good people who truly became lifelong friends. Ralph was a member of Pleasant View Church of the Brethren in Mt. Jackson and was also blessed to be a part of the Reformation Lutheran Church family in New Market. He called Mt. Clifton home for 77 years before moving to New Market. Along with the love of his life Judy, he is also survived by his daughter Karla Lynn Rupert Kokkonen and her husband Mark. Ralph loved Mark like his own son and truly enjoyed the time and friendship that they shared. He was so proud to be a Paw-Paw and loved to talk about his grandchildren: James Kyle Kokkonen and his wife Caitlin, Jayme Lynn Kokkonen, and Kelsey Renee Kokkonen. Ralph was a loving, kind, patient, and gentle husband, dad, and Paw-Paw and he will be deeply missed. A private graveside service will be held with Interment at Mt. Jackson Cemetery. A Celebration of Life will be held at a later date. Arrangements are entrusted to Heishman Valley Funeral Service, Edinburg. Memorial contributions may be made to Blue Ridge Hospice, 333 W. Cork St., #405 Winchester, VA 22601 or Alzheimer’s Association, 8180 Greensboro Drive, Suite 400, McLean, VA 22102.

The family of Ralph E. Rupert created this Life Tributes page to make it easy to share your memories.

Send flowers to the Rupert family.