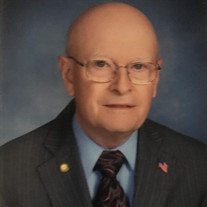 Raymond Francis Powell passed away at home June 23rd, 2019 in Woodstock, VA. He was born February 27, 1943 in Stapleton, NY, the son of Harry Emerson Powell Jr. and Lillian Christine Wallander Powell. In addition to his parents, he is predeceased by three brothers, Richard Francis, Charles Francis, and Robert Francis Powell and a nephew, Harlan Charles Powell. Ray was a loving husband and father. He leaves his wife of 48 years, Judith Vough Powell. He is also survived by three children and three grandchildren. From the very start, Ray was a hard worker. Even at the age of 14, he worked to earn money for college by breeding, training, and selling miniature Sardinian donkeys for college tuition. He graduation from Newton High School, Newton NJ, where he was the local FFA Chapter president, NJ state FFA president, and received numerous awards. Ray worked for the NJ State Conservation Service while attending Rutgers Univ College of Engineering and received a BS in both Agricultural and Environmental Science. Following Army ROTC at Rutgers, Ray was commissioned into the U.S. Army. Ray was a true patriot. He served two one-year tours of duty in Vietnam, earning his Senior Army Aviator wings. He spent one year in the 1st Cav Div flying CH-47 Chinooks. He then served this second year in the 1st Armored Div flying the UH-1 Huey helicopter and the U-6 Beaver airplane. After his tours, he earned a MS in Engineering Management from the Univ of Missouri-Rolla. He was Chief of Doctrinal Literature Management at the U.S. Army Command & General Staff College in Fort Leavenworth, KS. He instructed Officer Education (ROTC) & was guest Professor of Engineering at Princeton Univ. He was Director of Engineering & Housing in Ansbach, W. Germany and an Assistant Commander in the Europe Division of the Corps of Engineers in Frankfurt, W. Germany. He received the individual Federal Energy Management Award in 1985 from the U.S. Dept. of Energy, awarded by the Secretary of the Army. He completed his career as Chief of Engineer Facility Plans at Army Materiel Command in Alexandria, VA and retired as a Lieutenant Colonel in the Army Corps of Engineers. After 23 years of active duty, Ray first worked at NASA Goddard Space Center as a Project Manager and Senior Facilities Engineering Consultant and authored the NASA Facilities Maintenance and Energy Management Handbook. He then joined MAI as a Senior Engineer and Project Manager, providing contracting & facilities management support for the Army, Navy, and Air Force at Cape Canaveral Air Force Station, FL. He provided Technical & Cost Source Selection consultation for the Air Force, Navy, USGS, USDI, and provided facilities consulting to the University of VA, District of Columbia and Knox County, TN. After MAI, he established his own private engineering & contracting consultant business and served as president of the Fairfax Chapter of the Virginia Society of Professional Engineers before retiring to Woodstock, VA in 2005. He and Judy joined the Woodstock Presbyterian church in 2006. Ray served selflessly in many capacities including church treasurer, co-chairman of the Building and Grounds Committee, co-leader of the Mens’ Group, and co-coordinator of the church Fellowship Hall addition. With other men of the church, he was an instrumental part in creating the adult ESL classroom at the Woodstock Presbyterian Church. Ray served actively in numerous organization to include treasurer of the Woodstock Lions Club, member of Lions International, Life Member and treasurer of the Shenandoah Vietnam Veterans of America Chapter 936, treasurer of the Woodstock American Legion Post 199, Judge Advocate and Life Member of the Edinburg Veterans of Foreign Wars Post 2447, and Life Member of the National Future Farmers of America Alumni Association. His love and respect for his country was evident during the Shenandoah County Fair in which he conceived and initiated the “Veteran’s Day Tribute at the Shenandoah County Fair” for 10 years starting in 2009. He established a long-range plan to continue the tribute annually to honor veterans and bring awareness to the community of their devoted service. His dedication to education was evident by the numerous programs and scholarships he oversaw within the school system. He worked tirelessly for 25 years and served as chairman of the Northern Virginia regional middle school mathematics competitions known as MathCounts. He was Chairman of the Board of Directors for the Virginia Engineering Education Fund. He was Boy Scout Troop 43 Committee Chairman for 16 years and was actively involved with the Lions Club’s Sight and Hearing Screening for children. He was the chairman of the Scholarship Committees for the Lions, American Legion, VVA, and VFW, administered the oratorical and essay competitions, arranged for judges, and presented scholarships and awards to middle and high school students. Two VFW scholarships have been established to be awarded in perpetuity in Ray’s honor. Ray was a country man at heart and went back to his roots, participating in the Massanutten Antique Tractor and Gasoline Engine Club and tending to his sizable vegetable gardens. He always shared his plentiful harvest with the community. He was recognized as 2008 Legionnaire of the Year, 2015 VFW Comrade of the Year, and 2018 Shenandoah County Volunteer of the Year. He was recently honored with a tribute by the session and congregation of Woodstock Presbyterian Church and a Resolution of Respect from the Shenandoah Board of Supervisors for his service to the community. A visitation at the Heishman Funeral Home at Bowmans Crossing will be on Wednesday June 26th from 6-8 PM. A Celebration of Life service will be held at the Woodstock Presbyterian Church at 142 E. Court St., Woodstock on Thursday June 27th at 11 AM, officiated by Reverend Kate Rascoe and Reverend William Erbach. All are invited to a reception in the church fellowship hall following the internment at Sunset View Memorial Gardens, Woodstock, VA. In lieu of flowers, we invite donations to the Woodstock Presbyterian Church or the National Future Farmers of America Foundation. Online condolences may be left at www.valleyfs.com Arrangements by Heishman Funeral Home Inc., Valley Funeral Service Branch in Edinburg.

Raymond Francis Powell passed away at home June 23rd, 2019 in Woodstock, VA. He was born February 27, 1943 in Stapleton, NY, the son of Harry Emerson Powell Jr. and Lillian Christine Wallander Powell. In addition to his parents, he is predeceased... View Obituary & Service Information

The family of Raymond Francis Powell created this Life Tributes page to make it easy to share your memories.

Send flowers to the Powell family.