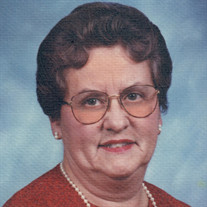 Regena R. Miller, 82, of Edinburg went to be with her Heavenly Father on Monday, April 26, 2021 at Pine Meadow Assisted Living in Woodstock. She was born October 6, 1938 at Woodstock, VA and was the daughter of the Late Nevin and Beulah Boyce Rau. She was a graduate of Woodstock High School, Woodstock, Virginia, class of 1957. After graduation she worked five years at the Blue Bell in Woodstock and then joined the Aileen family where she worked for 32 years. She then worked as a part time employee in the county treasurer and commissioner of revenue offices for a few years. She was a 4-H member in the Wesley Chapel 4-H Club, State 4-H All Star, and a leader in the club helping to lead the club to an outstanding club for a number of years. She was named the first Outstanding 4-H Leader of the Shenandoah County in 1967 and a State Outstanding Leader at Blacksburg during 4-H State Short Course in 1968. She was also the state winner in canning in 1959. Loving to do and show her hand work she helped at the Shenandoah County Fair for many years in the Fancy Hand Work Department. In 2016 Regena and her husband, Weldon, were named the outstanding volunteers of the year for their work at the fair. She loved to sew making most of her clothing and after retirement she found the love for quilting. Most of her work was pieced on the machine, but hand quilting was the way she finished her projects. She quilted with the Darcus Quilt Group at the Methodist Church in Woodstock on Monday mornings. She was a member of the Mt. Calvary United Church of Christ at Woodstock, where she served as a council member holding several offices, church secretary, Sunday school teacher for the youth for over 60 years and was Sunday school secretary for many years. Not only is she survived by her husband Weldon who she married in 1959, she is survived by three brothers, Ray, Riley and his wife Carole of Woodstock, Ronald and his wife Rhonda of Edinburg, and a number of nieces and nephews, great and great-great nieces and nephews as well as cousins. She was preceded in death by a sister Anna May Walker, and a brother Marvin Rau. A graveside service will be held on Thursday, April 29, 2021 at 2:00 PM at Sunset View Memorial Gardens by Rev. Derek Ritenour. Friends and family may pay their respects from 11:00am to 5:00pm at Heishman Funeral Home in Edinburg. In lieu of flowers donations may be made to Blue Ridge Hospice, 333 West Cork Street, #405, Winchester, VA 22601. Online Condolences can be left at www.valleyfs.com Arrangements by Heishman Funeral Home Inc., Valley Funeral Service Branch, Bowman’s Crossing.

Regena R. Miller, 82, of Edinburg went to be with her Heavenly Father on Monday, April 26, 2021 at Pine Meadow Assisted Living in Woodstock. She was born October 6, 1938 at Woodstock, VA and was the daughter of the Late Nevin and Beulah Boyce... View Obituary & Service Information

The staff at Heishman Funeral Home Inc. sends condolences to the family of Regena R. Miller.

Regena R. Miller, 82, of Edinburg went to be with her Heavenly...