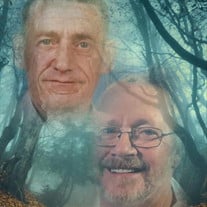 At 3:24, on January 27, 2021, Rex Alan Fadeley (our Sexy Rexy), took the hand of his father and was guided to meet his Heavenly Father. His hand was held by his loving wife, who did not leave his side. Beside his bed side was Patty's son Will, Rex's sister Judy, his sister-in-law Faye and Pastor George Bowers who was reading Psalms 23 and praying. In his final moments, as we sang him into Heaven with the hymn, Amazing Grace, he opened his eyes and looked at Patty with tears. She assured him we would all be okay and gave him permission to continue his walk to Heaven. He fought the good fight all the way to the end and forever will be our Hero. His memories will live on in all of us. Please, continue to replay his memories as often as possible and share them with family and friends. Remember his laugh, his smile and embrace his zest for life. Rex is survived by the love of his life, Patty Fadeley of Edinburg, his mother, Shirley Fadeley of Woodstock, siblings, Peggy Runion (Benny) of Mt. Jackson, Judy Narcross of Mt. Jackson, Mike Fadeley (Faye) of Woodstock, Billy Fadeley of Woodstock, Cindy Spiggle (Donald) of Mt. Jackson, and Rosie Scobie (Bruce) of Staunton. A stepson, Will Knicely of Woodstock, stepdaughter, April Busche of Rushville Ind., and a son Jason Fadeley of Edinburg. He has four grandchildren, Sean Davion, Kali and Salem. Rex had three nieces, Katrina Miller, Heather Smith and Chasity Fadeley, and two nephews Shawn Moton and Cory Spiggle. He was predeceased by his father Wayne Douglas Fadeley and a son-in-law, Freeman Narcross, Jr. His father, Wayne passed on January 28, 1995. They both passed at the age of 62. Rex was born on August 13, 1958 in Shenandoah County. He served in the U.S. Army for three years and the National Guard for a short time. He worked for Riddleberger Brothers for thirty-six years before his illness. He loved life. He loved people. Rex never met a stranger. When Rex heard music, his whole body moved and look out if you were his dance partner! His heart was huge and to him we were all the same in God's eyes. Definitely an example to live by. He adored his four-legged furry daughter, Scarlett. They were inseparable. Everywhere Rex went, Scarlett tagged along. Patty knew she was second to Scarlett, but happily accepted that fact. Services will be at a later date. In lieu of flowers, donations may be made in Rex's name to Blue Ridge Hospice 333 W. Cork St., Suite 405, Winchester, Va. 22601 Online Condolences can be left at www.valleyfs.com Arrangements by Heishman Funeral Home Inc., Valley Funeral Service Branch, Edinburg.

At 3:24, on January 27, 2021, Rex Alan Fadeley (our Sexy Rexy), took the hand of his father and was guided to meet his Heavenly Father. His hand was held by his loving wife, who did not leave his side. Beside his bed side was Patty's son Will,... View Obituary & Service Information

The staff at Heishman Funeral Home Inc. sends condolences to the family of Rex Alan Fadeley.

Send flowers to the Fadeley family.