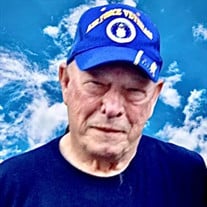 The staff at Heishman Funeral Home Inc. sends condolences to the family of Richard Eugene Barb. Richard Eugene Barb, 83, of Basye, passed away Saturday, March 5, 2022, at his home. The funeral service will be held Saturday, March 12 at 2:00 p.m. at Valley Funeral Service in Edinburg. Pastor Stephanie Heishman-Litten will officiate. Burial will follow in St. Paul’s Lutheran Church Cemetery in Jerome. Mr. Barb was born September 29, 1938, in Shenandoah County, son of the late Stewart Donald Barb and Sarah Elizabeth Miller Barb. He was an Air Force Veteran and met his future wife Wiltraud Barb while serving at Ramstein AFB in Germany. Following his military service, he and his late wife owned the former Montgomery Ward in Woodstock. After selling their ownership, he earned his commercial driver’s license and hauled cars for over 30 years. He was a lifelong member of the NRA and the Teamsters and was a member of the New Market Eagles. He was preceded in death by his wife, Wiltraud “Yemi” Fix Barb and brother, Roger Barb. He is survived by his son, Philip Lee Barb of Brewer, Maine; adopted son, Michael Barb of Folsom, California; sister, Doris Brannon of Kennesaw, Georgia and grandson, Garrett Barb of Brewer, Maine. Pallbearers will be Curtis Barb, Kevin Barb, Dick Coffman, Tim Haymond, Chris Jordan, and Peter Jordan. The family will receive friends Friday from 6-8 p.m. at the funeral home. In lieu of flowers, contributions may be made to the Orkney Springs Fire and Rescue Department. Online condolences may be left at www.valleyfs.com Arrangements by Heishman Funeral Home Inc., Valley Funeral Service Branch, Edinburg.

The staff at Heishman Funeral Home Inc. sends condolences to the family of Richard Eugene Barb.

Send flowers to the Barb family.