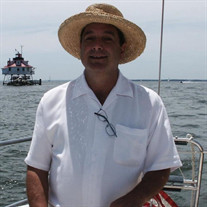 The staff at Heishman Funeral Home Inc. sends condolences to the family of Robert "Bob" Alan Rybicki. Robert ‘Bob’ Alan Rybicki passed away on March 22, 2022. Bob was born on August 6,1953 in Natrona, Pennsylvania to parents Theodore Rybicki, and Rosella Rybicki née Posney. He spent his early childhood in Pennsylvania, and later moved to Alexandria, VA with his family. Bob was preceded in death by his parents and his brother, Theodore ‘Ted’ Rybicki. He is survived by his children, Jacob Rybicki (Amy) of Centreville, VA and Emily Rybicki of Baltimore, MD. Also surviving are granddaughters Leila and Marissa Rybicki of Centreville, VA, his former spouse and dear friend, Nancy Rybicki, of Alexandria, VA and brother Jeffrey Rybicki (Linda) of Abingdon, MD and many nieces and nephews. Bob was a 1971 graduate of Thomas A. Edison High School. Professionally, he was a jack-of-many-trades. Bob was a long-time adjuster for Allstate where he prided himself on his ability to detect fraud. He also worked as a carpenter, truck driver, window salesperson, and in property management. His favorite job by far was one of his firsts, working at Penguin Feather Records, where he was able to indulge his love of music. Some of Bob’s favorite pastimes included playing music and euchre with his brothers. He played guitar and mandolin and was always ready to jump in to harmonize on one of his favorite songs. Family gatherings always involved plenty of music and often ended around a game table. Bob loved baseball, especially the Washington Nationals. He never missed watching or listening to a game. The day the Nats won the World Series was one of his favorite memories. Bob was a connoisseur of fine food and prided himself on perfecting recipes. He was well known for his biscuits, chicken and dumplings, bbq picnic beans, and his granddaughters couldn’t get enough of his homemade chicken soup. He made sure to stock up on ingredients if they were coming by so he could whip up a pot before towing them to the park in a wagon. Bob was an avid bird watcher and often kept a pair of binoculars close at hand. One of his favorite spots to look for birds was Huntley Meadows in Alexandria, but he always had an eye on his bird feeders at home, as well. A memorial and celebration of life will be held at a later date. His family will continue to honor his memory by doing the things he loved and sharing them with his grandchildren. In lieu of flowers, please consider making a donation to the Chesapeake Bay Foundation or Friends of Huntley Meadows Park. https://www.cbf.org http://friendsofhuntleymeadows.org/ Arrangements by Heishman Funeral Home Inc., Valley Funeral Service Branch, Edinburg.

Send flowers to the Rybicki family.