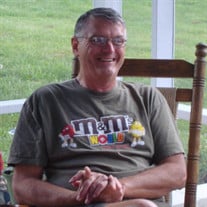 The staff at Heishman Funeral Home Inc. sends condolences to the family of Spencer Wilton McIntosh. Spencer Wilton McIntosh, 73, loved husband, father, Pop, brother, and friend, walked into his heavenly home on May 7th. He is now free of pain, limitations, and fear. Spencer was born in Arlington, VA on December 16th, 1948. He and his family moved to Jerome in 1957 where he made some of his favorite childhood memories. The family then purchased the Cheri Lee Motel in Edinburg where Spencer began his love for hospitality. After graduating from Central High School in 1967, he proudly served in the United States Navy for four years. He was a well known local radio personality for WRFL and WSIG. He continued his work in the restaurant business and eventually opened and operated Spencer’s Subs and Sandwiches for over fifteen years, “where friends meet and eat.” After selling the business, he had several jobs including working at Stanley Steamer. Spencer spent his last working years substitute teaching in Shenandoah County and especially loved his time at Triplett Tech. After a devastating accident on July 10, 2015, Spencer was left a total quadriplegic. While that injury carved a path for the remainder of his life, Spencer refused to be defined by his injury and limitations. He appreciated every day, every conversation, every visit, every meal, and most importantly, every “I Love You.” Spencer is survived by his loving and devoted wife of over 47 years, Jessie Jennings McIntosh; his Pride and Joy daughters, Ella McIntosh and Noel Spencer McIntosh Frye; his son in law CJ Frye; and his siblings Mandy, Colin, and beloved brother George. The highlight of the last ten years of his life was being Pop to his grandson, Roman Spencer Frye. Spencer was able to proudly pass on his love of music, appreciation for funny jokes, interest in coin collecting, and his ever inquisitive nature to Roman. He was predeceased by his parents George Colin McIntosh Jr and Nellie Spencer McIntosh. Spencer enjoyed music, traveling, telling stories, tinkering around the house, dad jokes, woodworking, yard work, hosting a good party and most importantly spending time with his family. Donations in his honor can be made to the Edinburg Christian Church, where he was a proud member, a no-kill animal shelter of your choice, or a Veteran’s assistance organization. All are welcome to a graveside service officiated by Pastor Matthew Diehl, at Cedarwood Cemetery in Edinburg on Thursday, May 19th at 2pm. A celebration of Spencer’s wonderful life will be held at the family home at a later date. In Spencer’s memory: cherish every moment, always drink the milk shake, and however you go, go forward. He will be missed and always loved. Online condolences may be left at www.valleyfs.com Arrangements by Heishman Funeral Home Inc., Valley Funeral Service Branch, Edinburg.

The staff at Heishman Funeral Home Inc. sends condolences to the family of Spencer Wilton McIntosh.

Send flowers to the McIntosh family.