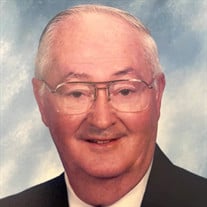 The staff at Heishman Funeral Home Inc. sends condolences to the family of Weldon R. Miller. Weldon R. Miller, 87, of Edinburg, went to be with his Heavenly Father on Sunday, November 28, 2021, at Pine Meadows Assisted Living in Woodstock. He was born October 23, 1934, at Edinburg, VA and was the son of the Late Clarence and Clara George Miller. He was a graduate of Edinburg High School, Edinburg VA class of 1953 and Palmer’s Business School in Woodstock in 1954. He was a Shenandoah County school bus driver while attending Palmer’s Business School. He served in the United States Army from 1957 to 1959. Upon his return from service in Germany, Weldon married his wife of 61 years, Regena Rau Miller, on December 11, 1959. Regena predeceased Weldon on April 26, 2021. After he graduated from business school he was a bookkeeper for Strasburg Poultry. After serving in the Army, he went back to Strasburg Poultry until it closed. He then went to work for the Blue Ridge Poultry Plant in Edinburg for several years as bookkeeper. Leaving the poultry plant he joined the family at the Aileen Company for 28 years. While there, he supervised all accounting for the retail stores and all company inventory. After leaving Aileen in 1996, Weldon was employed with Holtzman’s and at the Liberty Truck Stop until his retirement. Over the years, Weldon was a member of the local Ruritan Club serving as in various leadership positions and served on the District Cabinet filling different offices there. He was a 4-H leader for the Wesley Chapel 4-H Club helping to lead them to recognition as an outstanding club for a number of years. His contribution as a leader led him to be named the outstanding leader of the year for Shenandoah County in 1969. For a number of years Weldon served as Superintendent of the Field and Garden Crops divisions for both youth and adult departments at the Shenandoah County Fair. In 2016 Weldon and his wife, Regena, were named the outstanding volunteers of the year for their work at the fair. He was a member of the Mt. Calvary United Church of Christ at Woodstock where he was a trustee, the church treasurer, council member holding most every office at one time or another, Sunday school teacher for the adults, and served as the church sexton. Weldon is survived by two sisters, Shelva and husband Bobby Washbourne of Front Royal and Barbara and husband Cecil Holler of Edinburg. He is also survived by a number of nieces and nephews, great and great-great nieces and nephews. A graveside service will be held Friday, December 3, 2021 at 2:00pm at Sunset View Memorial Gardens by Rev. Derek Ritenour. Friends and family may pay their respects at Heishman Funeral Home from 9:00am-5:00pm on Thursday, December 2. In lieu of flowers, donations may be made to Mt. Calvary UCC at 1299 Sheetz Mill Road, Woodstock VA 22664 C/O Don Childs, church treasurer. Online condolences can be left at www.valleyfs.com Arrangements are being handled by the Heishman Funeral Home, Inc., Valley Funeral Service Branch, at Bowman’s Crossing near Edinburg, VA.

The staff at Heishman Funeral Home Inc. sends condolences to the family of Weldon R. Miller. Weldon R. Miller, 87, of Edinburg, went to be with his Heavenly Father on Sunday, November 28, 2021, at Pine Meadows Assisted Living in Woodstock. He... View Obituary & Service Information

The staff at Heishman Funeral Home Inc. sends condolences to the family of Weldon R. Miller.