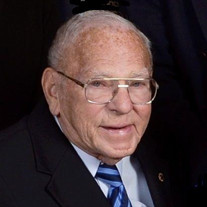 William Homer Coffman, 84, of Woodstock passed away on October 17, 2018, following an extended illness. A celebration of his life will be held on Tuesday, October 23, 2018, at 3:00 p.m. at the Woodstock Presbyterian Church with the Rev. Lisa W. Martin officiating. The family will receive friends on Monday, October 22 from 5:00 p.m. to 7:00 p.m. at the Church. Burial will be private in Sunset View Memorial Gardens in Woodstock. Bill was born on July 1, 1934, at Readus, west of Edinburg, and was the son of the late William Alfred Coffman and Beulah Bowers Coffman. He is survived by his wife, Lois Hepner Coffman, whom he married in 1954. In addition, he is survived by a sister Alice Coffman Borden Elm, a son Michael William Coffman (Donna) of Roanoke, a daughter Cynthia Coffman Wilkins of Woodstock, two grandchildren, Christopher William Coffman and Whitney Wilkins Good (Derek), and two great-grandchildren, Jax Cannon Good and Stella Elizabeth Good. He was preceded in death by a daughter, Lois Lynn Coffman, two brothers, Winfred Allen Coffman and Everett Lee Coffman, two sisters, Arlene Coffman Frye and Dorothy Coffman Seal Clem, and numerous nieces and nephews. He graduated from Edinburg High School in 1953 and started his banking career that same year with Riggs National Bank in Washington, DC. He returned to Woodstock in 1958 and joined the former Shenandoah County Bank & Trust Company, which was later acquired by First Virginia Banks, Inc. and is now part of the BB&T banking organization. He received various diplomas of graduation from banking schools in cooperation with the University of Virginia, Ohio State University, and The Stonier Graduate School of Banking with Rutgers University. After 33 years with First Virginia, and most of his career in Shenandoah County, Bill retired in 1991 as President and Chief Executive Officer of their member bank, First Virginia Bank – Planters serving Harrisonburg and Rockingham County. He was an active realtor for a number of years following his retirement from banking. Bill was a member of the Woodstock Presbyterian Church for more than 60 years where he was an elder and had served as Sunday school teacher, deacon, trustee, and treasurer. He was very active in the community and civic affairs and served as a former councilman and mayor of the Town of Woodstock. He was past president of the Woodstock Jaycees, Woodstock Chamber of Commerce, and Lions Clubs in Woodstock and Dayton. He served on the Board of Directors for First Virginia Bank – Shenandoah Valley and First Virginia Bank – Planters, Shenandoah Memorial Hospital, Shenandoah County Sanitation Authority, Shenandoah Valley Travel Association, Rockingham Development Corporation and Harrisonburg/Rockingham Chamber of Commerce. The family would like to invite the members of the Woodstock Lions Club to attend the funeral as a group. Honorary pallbearers will be George Brinkley, Norman Catlett, John Coleman, Jerry Germroth, Steve Heishman, Conrad Helsley, James Lambert, Clint Miller, Bill Moyers, and V.R. Proctor, III. We would also like to thank the staff of Greenfield Senior Living of Woodstock and New Century Hospice (Harrisonburg) for the exceptional care they provided. In lieu of flowers, memorial contributions may be made to the Woodstock Presbyterian Church, 142 East Court Street, Woodstock, VA 22664.

William Homer Coffman, 84, of Woodstock passed away on October 17, 2018, following an extended illness. A celebration of his life will be held on Tuesday, October 23, 2018, at 3:00 p.m. at the Woodstock Presbyterian Church with the Rev. Lisa... View Obituary & Service Information

The family of William Homer Coffman created this Life Tributes page to make it easy to share your memories.

William Homer Coffman, 84, of Woodstock passed away on October...

Send flowers to the Coffman family.